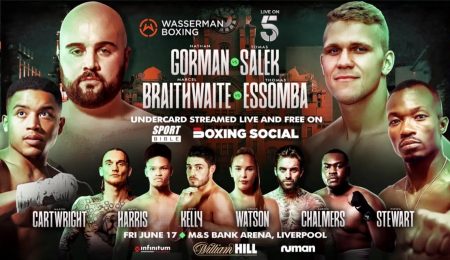 A must-see undercard will be shown LIVE from the M&S Bank Arena in Liverpool on June 17, as Wasserman Boxing returns with another fantastic free-to-air event. After over one million viewers previously during a hugely successful card, Liverpool will look to smash the numbers on what promises to be another night of elite fighting inside the squared circle.

Wasserman Boxing is pleased to announce that those in the UK and Ireland will have access to all the build up to the Liverpool card. Facebook users can view the undercard with SportBIBLE, whilst those watching on YouTube can get involved in the undercard action on the Boxing Social channel.

As the early fights reach their climax, head over to Channel 5 at 9pm to finish off Friday in style as Heavyweight Nathan Gorman (18-1, 12 KOs) looks set to reignite is World Title ambitions as he prepares for a heavy-hitting head-to-head against KO specialist and Czech national champion Tomas Salek (17-3, 13 KOs).

‘Pretty Boy’ Josh Kelly (10-1-1, 6 KOs) also features on the card as he looks to get himself back into World Title contention, alongside fellow Northerner and former MMA and Reality TV star professional Aaron Chalmers on his professional boxing debut.

Kalle Sauerland, Head Of Global Boxing at Wasserman said: “We’re very passionate about making boxing accessible to a nation that loves this sport so much. Getting as many eyes as possible on these events helps birth new stars, and British boxing is rife with it.

“After over a million television viewers last time out, we’ll be looking achieve massive figures again alongside a successful undercard being live streamed on SportBIBLE and Boxing Social.”