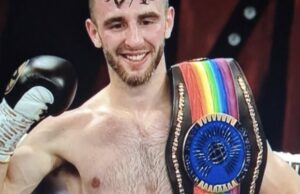 Dennis Hobson has hailed his partnership with Sam Knyoch after a successful joint show at New Douglas Park in Hamilton, Scotland, on July 31.

Broadcast live by Fightzone, the promoters staged an eight fight card that packed in some fan-friendly action, and saw two Scottish fighters pick up titles.

In the headline slot, Nathaniel Collins, 8-0 (3), did what no one else had managed previously by stopping Ghana’s Felix Williams in three rounds to win the Commonwealth Featherweight Title. While Dean Sutherland, 11-0 (3),also went home with a belt around his waist after beating Mexico’s Jose Antonio Delgado Velazquez via a TKO in seven to claim the World Boxing Organisation Youth Welterweight Title.

Billy Stuart was unable to make it three titles in a row for Scottish fighters though after being edged out in a terrific bout against another Mexican, Alejandro Jair Gonzalez, for the International Boxing Federation Youth Super Bantam Title.

Further down the card there were debut wins for Ben McGivern and Kevin Duris; victories for Gary Ducie and Jordan Grant, while Corey McCulloch earned a draw against debutant CJ Wood.

“Nathaniel is still developing,” said Hobson after the event.  “He doesn’t need to rest on his laurels. He’s super talented and made a real statement against the Ghanaian. He went into another gear and Williams just couldn’t live with it. He’s definitely a star in the making; I don’t want to get too bullish about what he might win, but I think he has so much potential. He’s got a bit of a swagger in a nice way, and I think we can have some big nights with him in Scotland if he fulfils his potential.

“I thought, on he night, Dean probably had the best win. The Mexican came to fight but Dean bemused him, gave him a boxing lesson and got the finish. Both Nathaniel and Dean got great wins and, potentially, we have a couple of stars there.

“Billy had to face probably the best of the two Mexicans that came over. It was a little bit too soon for him but I think in 12 months time Billy would beat that same opponent. We’ll put that down as a learning experience and his stock has gone up for me because he’s fought in better company. I honestly think that Billy will win something. He showed talent and heart and he’ll learn and be a better fighter for that.

“Sam [Kynoch] has got a good team together. I even met his mum and dad who are good people and you can tell he comes from good stock. He’s a pleasure to work with and he’s like me in that he looks for a solution to any problems. The set up at Hamilton was excellent and it came across really well, and it was more than small hall boxing. When we start to get on the world scene up there with Fightzone, we’re going to have some really big nights of Scottish boxing.”