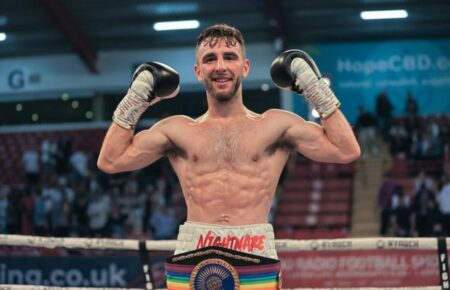 Nathaniel Collins showed what he’s all about in July when he scooped the prestigious Commonwealth Featherweight Title and became the first man to stop Ghana’s Felix Williams in the process. Williams arrived in the UK with an impressive ledger – just two losses from 31 fights, with 22 KOs – but was completely undone by Nathaniel in three rounds in an impressive Fightzone debut.

The Fightzone cameras will again be in attendance when the Scottish fighter makes the first defence of his belt against Thembani Mbangatha – one of the chief support bouts to Jack Massey’s IBO World Cruiserweight Title shot against Belgium’s Bilal Laggoune on November 26, at the Bolton Whites Hotel.

Subscribe to Fightzone to watch this fight and for great weekly boxing – just £4.99 a month (use code ‘boxen247’)

The South African visitor comes to the UK with an unbeaten record, 11 wins and five KOs, and also as an unknown quantity. Having never boxed outside his home country, it’s hard to gauge what the Cape Town resident will bring but, what is certain is, he will see this title shot as a life-changing opportunity and will be ready to lay it all on the line.

“It was amazing to win such a prestigious belt as the Commonwealth, and it felt like that was me putting my name firmly on the scene,” said Collins, 8-0 (3). “It’s given me the confidence to push on and do what I’ve always said I can achieve.

He [Felix Williams] came to have a go and I’ve always said, when that happens I will step it up. He was coming for a knockout and I knew that would only result in him getting knocked out!

“There’s nothing of Mbangatha on YouTube so I’m not sure what to expect, to be honest. It doesn’t really matter though because I always prepare for what I’m going to do. I’ll come in strong and I know my boxing ability is there. This will be like his world title shot though; it’s a massive opportunity so I’m definitely preparing for a hard fight.

“Appearing on Jack’s world title fight is exciting; it’s another big platform for me.  I’ve already headlined on Fightzone and it’s just been brilliant for boxing and Scottish boxing in particular. This will also be the first time as a pro that I’ve fought outside Scotland, so it’s a different experience for me and I’m really looking forward to it.”