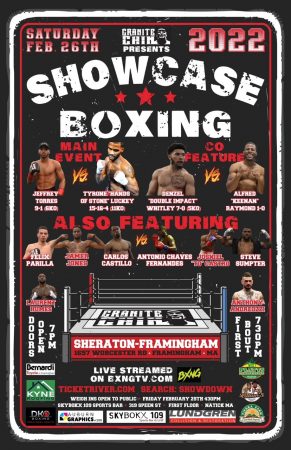 Due to COVID-19, the “Showcase Boxing” main event has changed as Jeffrey Torres (9-1, 5 KOs) will now face veteran Tyrone “Hands of Stone” Luckey (15-16-4, 11 KOs) in the 8-round headliner, Saturday night, February 26, at Sheraton Hotel in Framingham, Massachusetts.

Showcasing many of New England’s most promising and popular prospects, “Showcase Boxing,”  presented by Granite Chin Promotions, will be streamed live on www.bxngtv.com for $19.99.

“Showcase Boxing” will also mark Granite Chin’s first event in Massachusetts in more than 2 years, as well as being only the second professional boxing show ever in Framingham, which is located 23 miles west of Boston.

Luckey was originally scheduled to fight local favorite Nelson “Chino” Perez (5-0, 2 KOs), who has pulled out because he contracted COVID-19.

“Unfortunately,” Granite Chin Promotions president Chris Traietti explained, “we lost Perez, but Jeffrey Torres was willing to fill in for him and, to nobody’s surprise, Tyrone was willing to work with everyone to make the change possible. He’s a fighter, not one of these guys that pretends to be one on social media, posting videos of himself hitting bags or highlight reel knockouts of them beating up some 0-8 guy picked up off a job site. Tyrone is willing to test any prospect to see if they are the real deal or not. Torres comes from a giant gym, and he had a solid pedigree, so, no doubt, Tyrone will have his hands full and vice versa. This will be a fun fight!”

Luckey, fighting out of Manahawkin, NJ, is the reigning ABF USA Mid-American Super Lightweight Champion. The always dangerous Luckey has been in against top prospects such as Mike Ohan, Jr. Jamaine Ortiz, Tyler Tomlin, and Frank Martin.

Torres, a native of Puerto Rico now fighting out of New Haven (CT), has won two in a row since suffering his only pro loss to 7-0 Josh Wagner last October.

Denzel is a “legacy boxer” as the latest member of the “Fightin’ Whitley family,” trained by his father and uncle, Derrick and Darrin, who were respected pro fighters in New England.

Raymond, 31, made an auspicious pro debut this past November 13th, upsetting previously undefeated Julien Baptiste (3-0) by way of a 4-round split decision.

“This fight has all the makings for high action,” Traietti remarked. “’Keenan’ just upset a 3-0 prospect in his last fight, so his confidence is through the roof which makes him dangerous. On the other hand, you have Denzel looking to step up with each fight and get on television in the near future. He comes from a family with a long history in boxing. Denel really has all the pieces to be something special.”

Decorated amateur Felix Parilla (3-0, 3 KOs), of New Haven, has been added to the card in a 4-round fight against junior lightweight Weusi Johnson (3-19-1). Parrilla is a 4-time New England Golden Gloves Champion, as well as a 2018 National Golden Gloves silver medalist.

“I am excited to showcase a big chunk of the rapidly growing Granite Chin roster,” Traietti concluded. “I have been setting out for the last 2 years to really create a roster of exciting fighters who will be regulars on major networks in the near future. If you’re looking for a night of quality, high-competitive boxing, the Sheraton on February 26h is the place to be.”