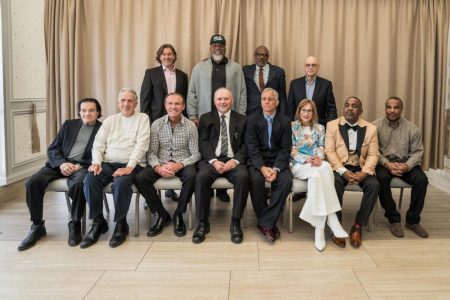 The New York State Boxing Hall of Fame’s (NYSBHOF) Class of 2122 was inducted this past Sunday at a special ceremony, sponsored by Ring 8, in front of 360 attendees at Russo’s On The Bay in Howard Beach, New York.

“This was the most emotional NYSBHOF induction dinner ever,” NYSBHOF president Bob Duffy said. “Several inductees cried during their acceptance speeches and that really made everything more exciting for everybody. You could see how really proud each of the inductees were as they proudly displayed their belts. This is all about honoring New York boxing people for their accomplishments and contributions. It was another knockout!”

One of the largest ovations was for Master of Ceremonies Dave Diamante for his remarkable recovery from a near-death accident that left him with a broken back.

Each attending inductee (or direct descendant of)  received a custom-designed belt signifying his or her induction into the NYSBHOF.

All boxers needed to be inactive for at least three years to be eligible for NYSBHOF induction, and all inductees must have resided in New York State for a significant portion of their boxing careers or during the prime of their respective career.

Bill Verigan: “Whether a boxer is in the Hall of Fame or not, they train hard, compete hard and have overcome hard losses. I’m very, very thankful to be here today. Thank you so much.”

Shannon Briggs: “Let’s go champ! Let’s go champ. Let’s go champ. This is amazing. I grew up in Brooklyn and lived in Brownsville. I weighed less than 2 pounds when I was born and asthmatic. I was bullied growing up in Brownsville, but I made it. We lost our home. Tough times growing up. I had to fight. I can’t believe I’m in the Hall of Fame. My aunt said, ‘We going to make it.’ She’s here today.

“I fell into boxing. I was never into sports. I can’t catch and still can’t dribble. But when I put gloves on, something about me changed, and nobody could do anything to me. No more bullying. I went from sleeping on the train or in the gym to traveling around the world. Nobody believed in me until Vito Antuofermo said, ‘This kid can be something.’ I just turned 50 and I’m up here with Vito. I won the Golden Gloves when I was homeless. This is all unexpected. I never though I’d be a boxer. I put gloves on and got busy. I started winning. Boxing helped me stay out of jail, selling drugs, or running the streets. I became heavyweight champion of the world. Shout out to everybody who believed in me. A lot are here today. Thank you, guys. Let’s go champ!”

Johnny Turner: I want to thank everyone for having me here today. I want to thank my trainers and Joe DeGuardia for believing in me. My most prestigious fight was with Wilfredo Benitez, and I was in the move, ‘Raging Bull.’ I’m a very lucky guy.”

Larry Barnes: “I’m going to be short; I can’t match Shannon. Let’s go champ! I’m very excited to be here with all these champions. I want to thank all the people in boxing for believing in me. I never gave up. Most of all, I want to thank me for putting in all the hard work.”

Michael Bentt: “It’s wonderful to be back in New York. I didn’t get here by myself. I want to thank four groups: my mentors, sponsors and facilitators, boxers who inspired me, and my allies.   I was captain of the USA Boxing Team and got a call to be in the movie ‘Ali’ (he played Sonny Liston). Young people should seek people like those who inspired me: Muhammad Ali, Mark Breland, Mike McCallum, Shannon Briggs, Evander Holyfield, Ronald Turner and Monte Barrett. They fueled my flame.”

Jill Diamond: “I want to thank my two biggest mentors, Jose Suliaman and Joe Dwyer. I’d like to thank my New York family who still think I go to the Golden Globes instead of the Golden Gloves. And thanks to my WBC family that embraced me, especially Mauricio Suliaman, who said to come join us. I do know that in the big boxing family, if anybody hurt somebody, they would always help. I wish, especially with what’s going on today, others settled things in the ring like us. The world would be a better place.”

Mike Silver: “I’m very humbled and appreciative to the New York State Boxing Hall of Fame selection committee to receive this honor. It’s so gratifying coming from peers. Boxing is the most colorful sport. In my books I give my perception to be informative, educational, and entertaining. I used to check newsstands for the new Ring magazine and Boxing News. I respected boxers and fell in love with the sport. One thing will never change in boxing. In the ring it’s about hitting without getting hit, the science of the sport. Boxers’ stories are not written. It takes their blood, sweat and tears. And that will never change.”

Don Elbaum: “I’m honored and thankful by this. What a run it’s been running shows. I’m still doing it. I remember putting shows on at Madison Square Garden. No sport has 1-on-1 world champions like boxing. Many countries have kings, but there is only one in boxing, and that’s the world heavyweight champion.”

Donny Lalonde: “I would be here without Bobby Cassidy. Bobby Cassidy, Sr. was the number one light heavyweight in the world. He was also a trainer who taught me what it took to be a boxer. Now, I’m in the New York Hall of Fame with him and his son, Bobby Cassidy, Jr. I was from Canada, and I was told that being a champion from there was worthless. When you grow up in a broken home, you really need somebody to believe in you. Don Majeski believed in me. Tommy Gallagher and Bobby Cassidy made my spirit rise high. I was ready to take on the world. Everybody said I had no business being in the wring with Eddie Davis, after he went 15 rounds with Michael Spinks. I knocked him out 22 seconds into the second round to win the world title. Thanks to the New York State Boxing Hall of Fame for having me here.”

John Verderosa: “I appreciate the accolades. This is fantastic. Forty years later, it blows my mind that people remember me from so long ago. I’m so honored. Thank you so much.”

Verno Phillips: “New York Hall of Fame, baby. I made it! I put in the work. Like my grandmother said, ‘You got to go out and run.’”