Next up, Riddick Bowe 53 returns on October 2 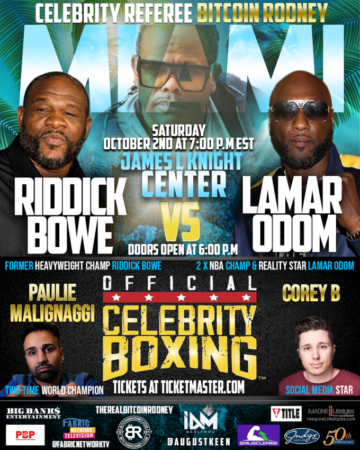 After the recent Evander Holyfield farce, the next former champ to be wheeled out of boxings graveyard is 53 year-old Riddick Bowe, courtesy of ‘Official Celebrity Boxing’.

Riddick Bowe, 6’3 and 53 years old, reigned as the undisputed world heavyweight champion in 1992. The same year he is revered for his knockout of Evander Holyfield. October 2nd will be his first time in the boxing ring since 2008. He faces 2x NBA champ and ‘reality star’ Lamar Odom.

Odom who is 6’10 and 41 years old, is known for his time with the Los Angeles Lakers as well as his Reality TV stardom on Keeping up with the Kardashians.

Lamar Odom took on singer/actor Aaron Carter in Atlantic City, NJ this past June where he claimed the Official Celebrity Boxing Belt and will now defend his title October 2 at the James L. Knight Center against Riddick Bowe.

Undercard matches to include Carlton Washington co-founder of 4Ever Young Anti-Aging and former KO winner from South Florida’s 2019 OCB fight. Carlton will be taking on Actor/Wrestler Byson Clutch who also previously fought and lost with a split decision, this will be his Redemption Match. Paulie Malignaggi, 2x World Champion in Boxing will take on Social Media Star & Radio Host Corey B. Prince from VH1’s Love and HipHop will go toe to toe with Holy Gxdsocial media star with 12M on TikTok.

This event is sanctioned by ISKA (International Sport Karate Association)?? What ‘checks’ will be taken to give the thumbs up for Bowe to fight would be interesting to see.

All this is going too far now and it is just a matter of time before there is a serious casualty.

Round 12: Celebrations of the Independence of Mexico without boxing Anthony Joshua signs career-long deal with Eddie Hearn