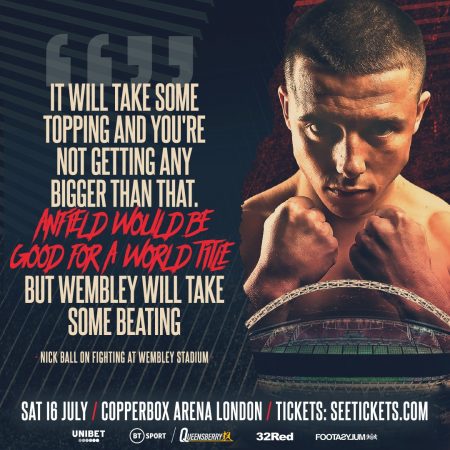 Nick Ball won plenty of plaudits when he returned home to Liverpool after announcing himself on the big stage last time out in April.

After all, the pint-sized featherweight delivered a big contender for performance of the night at Wembley Stadium in front of tens of thousands of people and probably millions watching around the world.

The far more seasoned Isaac Lowe was brutally assaulted by the Scouse scrapper and was finally spared any further punishment in round six after being dumped to the canvas in the second.

The win took Ball’s record to 15-0 and, more importantly, saw him win a first major belt with the WBC Silver title now a prized possession in the Ball household.

On Saturday he now makes a first defence of his title against the Namibian Nathanael Kakololo, live on BT Sport.

He was originally scheduled to challenge for the vacant British title against the also unbeaten Nathaniel Collins before the Scottish talent ruled himself out with a hand injury.

There is no more basking in his Wembley glory for Ball.

“In the first couple of weeks everyone was on me,” he recalled. “Everyone was made up for me but then it does die down and you are back to normal.

“Nothing has changed for me though, it has just made me train even harder, to be honest, and focus more because I have got something to lose now with the title and I don’t want to lose that.

“Everyone does seem to know who I am now. I’ve enjoyed it and it’s been alright but you can’t switch off and you’ve got to stay focused. I’ve appreciated all the support.

Should he overcome Kakololo, whether the British title shot against Collins comes next remains to be seen, but Ball himself questioned the desire of the unbeaten Commonwealth champion to share a ring with him.

“I don’t know anything about it at the moment and I will fight whoever is put in front of me. He had his chance to fight and he pulled out with a sore hand. If that was me, I would get in the ring with one hand working and I have done. There are no excuses, if you’ve got a fight you get in and fight, especially for the British title.

“He didn’t want the fight with me and he hopes I will be moving on after this. I will fight for it if Frank wants me to and having the British title would be great. I would make him fight me for it.”

Tickets for the show at the Copper Box Arena on Saturday, 16 July are on sale priced from £55 and are available from SeeTickets.com.