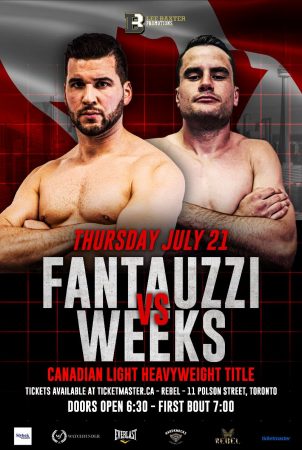 Lee Baxter Promotions is proud to announce another fantastic night of boxing at REBEL Entertainment Complex, Toronto. The night of boxing will be headlined by Nick Fantauzzi (11-0 5KO’s) as he prepares to take on Greg Weeks (3-2 3 KO’s) for the Canadian Light Heavyweight Title on July 21st.

“Nick is proven time after time that he keeps fans on the edge of their seats all night, he deserves to headline a show and what better way than to fight for the Canadian title”

Fantauzzi’s last fight at REBEL is one to beat, after he dominated Darren Fletcher on the Samuel Vargas vs Przemyslaw Runowski undercard in front of a packed crowd. Fantauzzi has been hard at work, training at the new Hardknocks Boxing Club location under the watchful eye of Head Trainer Billy Martin.

Deep into his training camp, a focused Fantauzzi said “I can’t wait to headline at REBEL on July 21st for the Canadian title. I’m excited to make a statement and get the win in front of my fans.”

Co-featuring on the event is the seasoned Steve Rolls (21-2 12 KO’s). Rolls was the main event at Madison Square Garden in his last fight as he took on the heavy-handed Edgar Berlanga for the WBO NABO Super Middleweight Title, in Berlanga’s home city. A stellar performance from Rolls took the fight the distance and Berlanga edged it on a controversial decision.

Amanda Galle (6-0), Canada’s female Super Bantamweight champion, is back in action and looking to make it 7-0. Galle owned the ring and took home the Canadian title in her last fight against Tania Walters on the Vargas Runowski undercard.

Making his much anticipated professional debut is former Canadian National Team member James Hughes. Hughes is ready to showcase his talent on July 21st for the first time on the professional scene – be sure to keep an eye on him.

Last but certainly not least, highly touted prospect Josh Lupia (5-0 5 KO’s) makes his return to the ring. A tragic incident that nearly cost Lupia his leg led him to take a break from the sport. After several surgeries and a long rehab process, he is back to take on the Super Lightweight division by storm.

Tickets can be purchased on Ticketmaster. For VIP Booths, please email sales@leebaxterpromotions.com.

Follow us on our social media accounts for updates on our fighters and events.