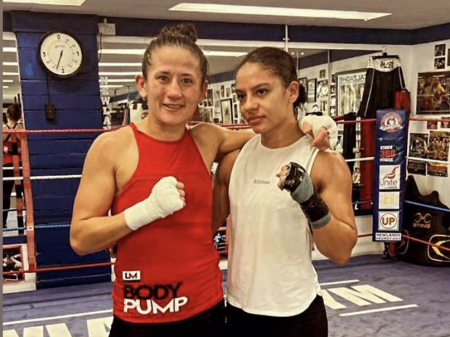 Nina Hughes will become the latest talented female star to join the paid ranks on Friday – and she’s relishing every moment of it ahead of this week’s action-packed #MTKFightNight event.

Hughes faces experienced Claudia Ferenczi as part of a huge card at York Hall in London, which is headlined by an IBF featherweight title final eliminator between Isaac Lowe and Luis Alberto Lopez, and will be broadcast live in the US on ESPN+ in association with Top Rank, and worldwide on IFL TV.

Hughes achieved great success as an amateur, winning four ABA national titles and becoming part of the GB Boxing set-up, and she is ready to now take the professional game by storm when she makes her debut later this week.

Hughes said: “I’m really excited to finally be making my professional debut. I’ve been training really hard and waiting patiently for this day.

“I have had some great sparring against some really good girls. Training has gone well and we have been working on a lot of things and practicing them in sparring, so it’s all coming together and I’m feeling good and ready.

“I’m really happy my debut is at York Hall. You only get one professional debut so I’m glad to be having it at such a historic venue. I boxed here a couple of times as an amateur and now I’m looking forward to boxing here as a professional.

“I don’t really know too much about my opponent, but I know she’s tricky and can try to hold a lot. My fans will see some good boxing skills from me and will see what I’ve been learning in the gym.

“I can be aggressive and fight on the front foot, or I can fight on the back foot too so you’ll see a lot of different things. Hopefully over the next year I’ll get a few more fights, and then we’ll push on to box for titles.”