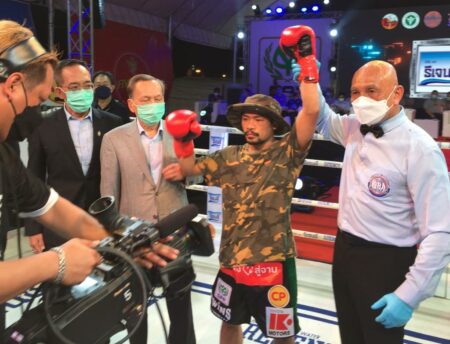 Thammanoon Niyomtrong returned to the ring and landed a third round TKO against compatriot Siridech Deebok to retain his Minimumweight Super Championship at the Chang Arena, in Buriram, in his native Thailand, on Tuesday.

With a long inactivity due to the pandemic and a postponement of the fight a few months ago, the boxer known as Knockout CP Freshmart had to wait more than a year to box again since March 2020, when he made his last fight.

The Thai showed superiority from the first bell and his attacks managed to knock down the challenger twice. The punishment was evident and in the third chapter, the third man on the ring was forced to stop the actions to give a new victory to the WBA monarch at 105 pounds.

Niyomtrong won the interim title of the category in 2014 by beating Carlos Buitrago. He defended that title once before taking on Byron Rojas in 2016 and snatching the championship he had defended seven times. In 2019, he became Super Champion and has defended that crown twice. In total, there have been 12 defenses at that weight over seven years for the Thai.

Universum Box Promotion organizes first event with Probellum Boxing Courtenay vs. Mitchell for the WBA belt in Liverpool this Saturday