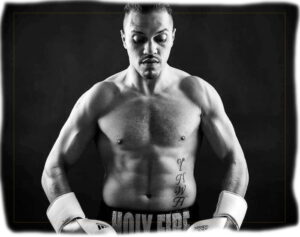 Resurrected Lightweight contender Noel “The Holy Fire” Echevarria will look to continue his rise when he fights for the vacant Universal Boxing Organization™ (UBO) International title on June 5 in Jonesboro, Georgia.

Born in Puerto Rico but now fighting out of Kernersville, North Carolina, Echevarria got off to a great start to his career, turning pro after winning the 2010 Junior Olympics and winning his first eleven paid fights.

Unfortunately his personal life was in turmoil, and he subsequently got involved with drugs, which naturally affected his boxing career.

It should be noted that he only lost to very good opponents, including world champions in the making Tevin Farmer and Oscar Valdez, and Echevarria had plenty to offer when he returned to the ring.

A very religious person, he is clean, rededicated, determined and on a mission!

Since coming back, the southpaw family-man has won six of seven outings, five of them inside the distance, and picked up three titles in the process.

Still only thirty years old, he has time to win many more, and he will be going all out to make the UBO International belt his fourth.