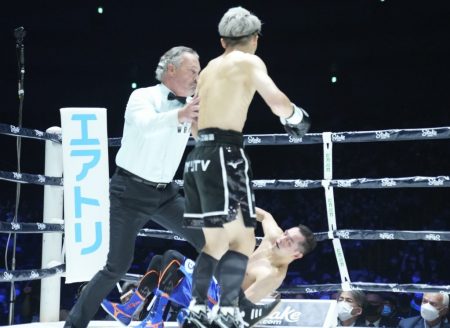 Nonito Donaire says his hopes of unifying the bantamweight division by defeating Naoya Inoue unraveled when he was floored by a punch he didn’t see.

The Filipino Flash lost his rematch with the Japanese star in Tokyo, yesterday, when the referee stepped in to end the contest at 1:24 of the second round.

Donaire had started the fight at the Super Arena confidently but was floored by a punch near the end of the opening round and has admitted it may be the hardest shot he has ever felt.

The 39-year-old got to his feet but Inoue moved in for the finish and having floored Donaire again, in the second round, referee Michael Griffin deemed the future Hall of Fame inductee had taken enough punishment.

“When I got caught I didn’t even know what happened,” Donaire said.

“I didn’t see the punch as I was trying to counter him.

“It is the hardest punch I have ever been hit with; I came out completely blank. I didn’t see the punch coming.”

Donaire, who lost his WBC bantamweight title in the defeat, says he deviated too far away from a game plan that had, in part, been hatched by Sugar Hill Steward.

The Filipino hero had planned to “use the jab, use the feints” but ended up being dragged into a scrap and says he paid a heavy price.

“We came here with a good game plan and I was in tremendous shape, I have never been in that shape in my life,” Donaire said.

“But in trying to implement the game plan I got caught up in wanting to brawl and that is my big flaw – I love brawling.

“It is hard for me to change that overnight but it was a big mistake.”

“I came in really confident but unfortunately I got caught cold with a big punch.“

Donaire was magnanimous in defeat and reserved praise for Inoue, who is now targeting an undisputed bantamweight showdown with Paul Butler.

“Inoue is a strong fighter and I give big credit to him for his victory and I wish him the best in his career,” Donaire said.