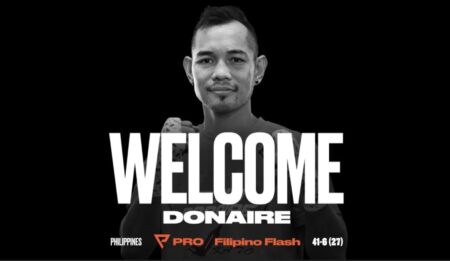 Donaire (41-6, 27 knockouts) is the reigning WBC bantamweight champion, and is universally recognised as one of the greatest boxers of the last 20 years.

The ‘Filipino Flash’ won his current world title with a fourth round knockout win over Nordine Oubaali earlier this year, while he has also claimed world honours at flyweight, super-bantamweight and featherweight.

He has been involved in some of the biggest fights that the sport has seen, sharing the ring with fellow greats like Jorge Arce, Guillermo Rigondeaux, Vic Darchinyan, Naoya Inoue and Carl Frampton.

An extremely popular figure, Donaire is loved and respected around the world, and will now look to add to his already-earned Hall of Fame legacy by joining forces with Probellum, and continuing his long-time relationship with Probellum President Richard Schaefer.

Probellum’s number one goal is to empower fighters and galvanize a global fanbase, while promoting the best and biggest fights to boxing fans around the world, with Donaire’s arrival helping to achieve that.

His signing sees him follow in the footsteps of other elite names to team up with Probellum, including Regis Prograis, Badou Jack, Eimantas Stanionis, Arthur Biyarslanov, Taras Shelestyuk, Ricky Burns, Eduardo Hernandez and Brandon Moore.