Nordine Oubaali Has Left Nothing To Chance Ahead Of Saturday 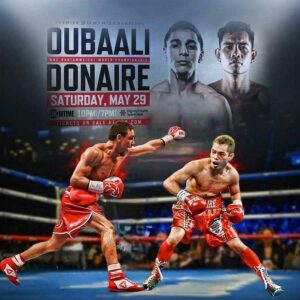 One of the most anticipated fights, where the World Boxing Council bantamweight title will be at stake, headlines a Showtime Championship Boxing card on May 29 at Dignity Health Sports Park, Carson, California.

Champion Nordine Oubaali of France (17-0, 12KOs), will attempt the third defense of the title he won by defeating Rau’Shee Warren in January 2019.

Oubaali, a two-time Olympian who represented France in 2008 Beijing and London 2012, has not fought since he defended his crown by defeating Takuma Inoue on November 9, 2019 at Japan’s Saitama Arena.

After Oubaali contracted COVID-19, cancellation of their originally scheduled showdown for December. But now, the two are finally ready to face off.

“Winning this fight against Donaire will give me recognition. I am the world champion, but this fight will help people remember my name as someone who beat a future Hall of Famer. Nonito is an experienced fighter, but I feel like I have so much experience. I have fought excellent boxers in my amateur career. I have been fighting at the highest level since I was very young, so I feel like we are both very experienced. That will make it a very exciting and entertaining fight for the fans.

“I am always active and very disciplined. Boxing is my life, and my team and I have the experience to deal with these aspects to keep us going and prepared. Experiencing the quarantine in total isolation was a great mental test, but I think my fighting mentality was key to staying focused. I took advantage of the time to focus on my goals and I had the opportunity to spend more time with my family.’

Teófimo López Opened The Doors Of His Camp In ‘Sin City’ Ricardo Maldonado: We Will Put On A Great Show In Mexico City