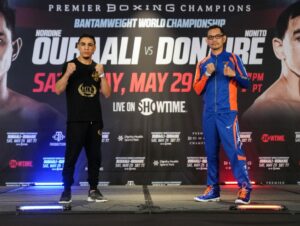 Nordine Oubaali and Nonito Donaire had a chance to look into each other’s eyes as they squared off at their final press conference.

They each had plenty to say ahead of their respective showdowns, with both Oubaali and Jukembayev extremely confident of earning victories.

Oubaali said: “We’ve sparred but training is training. When you go into a fight, it’s not the same. Every fight is different and I know on Saturday I will put on a great show with Nonito Donaire because I know he’s a good boxer but I know I’m the best. I trained so hard for this and now I’m ready to fight. I want to show everybody that the best two bantamweights in boxing today are fighting on Saturday.

“Yes, he’s had an outstanding career and he has power but I believe I have more power than him. I know I have the power. He’s a good boxer but I’m the world champion and on Saturday I’m going to show the world who is the best. I know I am the best. I respect Nonito. He’s had a good career but I’m the best in the division.

“The difference in the fight is going to be I want to win more. I want to continue to make history and stay as the world champion in this division. I know that it’s my time. I want this more than he does.

“If I’m victorious, why not have my next fight be for the unification? I want to make history every time and this is my motivation. I’m here because I love boxing and I want to face the best boxers every time. I’m facing Nonito Donaire and that’s great for my career. I just like to fight and this is my life.”

Donaire said: “It would be great to win the title at 38 years old and become the oldest champion at 118 pounds, but let’s keep it going. Let’s make it 40. Let’s make it 42. There ain’t no stopping me. Mentally, I’m very grateful but at the same time I’m just very ready.

“I’m always healthy and the reason why I can compete with anybody is because I keep myself healthy and I work hard. There’s nothing less than 100 percent every time I’m in that gym.

“I’m very hard-headed so I don’t always do what people tell me to do. People can say that it’s their time. But I also have my time and I’m always going to be the one who concedes their time or makes that decision. It’s still my time.

“It’s going to be a great fight. Oubaali is the champion for a reason. He’s been through it in terms of the amateurs and making it here. So we’re not underestimating any of that. But I’ve fought in this venue many times and I always make magical fights in the first place. It’s always going to be magical with me. I’m a unicorn.

“The difference in this fight is going to be my hunger. He’s younger than me but I have the hunger. We both have an objective and that’s what’s going to make this a great fight.

“I want to fight the best out there. I want the rematch with Naoya Inoue and I want to get all the belts. The only thing I haven’t accomplished in boxing is becoming undisputed champion. I’ve done everything else. Fighter of the Year. Knockout of the Year. Multiple championships. Four-division champion. You name it. That’s my main goal. Get the belt and put them all together.

“Bantamweight is my real weight. I’ve always fought in the heavier division because of the excitement, the challenge and the lucrative offer or the names at that time. Now, I’m here where I belong and this is where I’m really strong.

“The layoff will not be a factor at all. The time off helped me out. Just being out of the ring helped my body recover. And the eagerness and the hunger is there more than ever. It was a blessing for me.”

Jukembayev said: “I had a great training camp. I am ready for Saturday night. I know that he’s a good fighter but I promise that I will be ready.

“We will see Saturday night whether it’s going to end in a knockout. I’ll show you what I’m made of, and you will all see.”

Matias said: “I will be his toughest test without question and come Saturday night, everybody will find out why I’m saying that.

“I believe him when he says that he has the tools to get a stoppage on Saturday. But it’s not just a matter of saying, on Saturday night he has to prove it. If it’s going to come out of your mouth, then you have to prove it.

“We’re both knockout artists and with what we’re looking at, this fight should not finish by a decision.

“I don’t have much to say about that fight against Petros Ananyan. Those that saw me lose, I lost. There’s nothing I can say about it. But those that know boxing know that I’ve been progressing and improving and you all will see that on Saturday.”