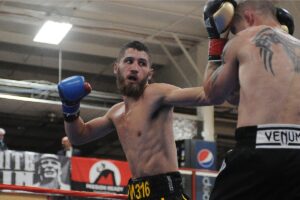 (all pictures by Emily Harney/ Fightography – picture gallery below)

Whitman (MA) boxer Mike Bad Man” O;Han, Jr. dominated Ryan Dibartolomeo (3-1-1, 1 KO) from start to finish in the main event, nearly pitching a complete shutout, winning every round on two of the judges’ cards, all but one on the other, to capture the vacant New England welterweight crown.

O’Han used his height and length to his great advantage, effectively fighting the majority of the time on the outside, throwing crisp punches at the smaller Dibartolomeo, the reigning New Hampshire State 147-pound division titlist.

In the co-feature, Danbury’s (CT) “Fly” Mike Marshall (4-1, 3 KO’s) took early command and pulled away from defending champion Justin “Crazy Train” Rolfe (4-2-1, 3 KO’s), who was making his first title defense, to take home the New England heavyweight strap. The two fought in close quarters throughout 8-rounds, but Rolfe found himself on the ropes too often, and that’s where Marshall took advantage to win a decisive 8-round unanimous decision by scores of 79-71, 79-73 and 78-74.

In the afternoon show’s main event, Maine favorite son Brandon “The Cannon” Berry (19-5-2, 13 KO’s) knocked out West Virginian Zack Kuhn (10-7-1, 5 KO’s) to capture the UBO All-American welterweight title. Berry was stunned in the opening round, but he fought back gamely, exploding in the second round to floor his opponent three times, resulting in an impressive victory by way of a technical knockout when referee Leo Gerstel waved off the fight.

Promising middleweight prospect Frank “The Tank” Hogan (3-0, 3 KO’s), a former New England Golden gloves champion hailing from Weymouth (MA), landed a blistering right hook to the body from his southpaw stance to knockout Cliff McPherson (2-16,1 KO) in round one.

A pair of Massachusetts welterweights, battle tested “Ruthless” Augustine Mauras (7-7-3, 3 KO’s) and pro-debuting John Ferrera, put on an entertaining match. The fighters went toe-to-toe in an action-packed fight with Mauras pulling off a mild upset by winning a 4-round majority decision.

Undefeated New Bedford (MA) welterweight Edet “Papito” Mkpanam (5-0, 4 KO’s unloaded a fierce body attack in the third round, dropping Tahlik Taylor (3-15-1, 1 KO) twice, and the end came early in the fourth, when Mkpanam went upstairs and sent Taylor to the mat with a sweet right.

In a battle of Woburn (MA) middleweights, pro-debuting Julien Baptiste (1-0, 1 KO) stopped Leonardo Ladeita (0-6) in the fourth and final round with a strong overhand right that landed squarely on his opponent’s jaw.

In opening bout in the evening segment of “Gold Rush,” Braintree (MA) welterweight Chris “Tumbaros” Tuburcio (1-0, 1 KO) had an auspices pro debut, pounding Jader Alves (0-3) onto the mat with a powerful right in round three, after which referee Jackie Morrell called the fight off.

The latest member of the Holyoke (MA) fightin’ Whitley family, welterweight Denzel Whitley (1-0), made short order of his pro debut, blasting out Caleb Denham (0-2) in the first round. Whitley floored Denham twice, both via quick rights on the chin, and referee Morrell halted the action after the second knockdown.

Albany (NY) junior welterweight Ray Jay “The Destroyer” Bermudez kept his perfect record intact, improving to 10-0 (7 KO’s), outclassing Rynell Griffin until referee Gerstel had seen enough and stopped the fight in the fifth round for a technical knockout.

Lowell (MA) heavyweight Zack “Shark Attack” Calmus (1-0, 1 KO) had a memorable pro debut, knocking out Yhago Goncalves (0-1) at the end of round one. Calmus hurt Goncalves with a short punch and referee Gerstel called the fight when he determined Goncalves was unable to continue.

Journeyman Larry “Slo Mo” Smith (12-44-2, 8 KO’s) knocked out Jesus Cintron (1-16-2, 0 KO’s) in a rematch of a fight this past August at the same venue, in which Smith won for the first time in nine years, a unanimous 4-round decision to a very late replacement in Cintron. Smith knocked down Cintron in the fourth round and he soon closed the show with a right that floored Cintron again, leading to referee Morrell to wave off the fight.

Maryland cruiserweight Larry “Hitman” Pryor (13-22, 6 KO’s) overcame a wild start to defeat pro-debuting Scott Lambert, who came out of the corner throwing bombs. Pryor came out an exchange to drop Lambert early with a short right and midway through the opening round he unloaded a vicious straight right to drop Lambert for the second time. Referee Gerstel had seen enough, and he halted the action for a technical knockout. Former New England Golden Gloves champion Josniel Castro (2-0), now fighting out of Worcester (MA), outclassed sturdy Saul “The Spider” Almeida en route to winning a unanimous 4-round decision. Castro had recorded the lone knockdown of the fight

Fight Notes: Times of the stoppage was 1:23.