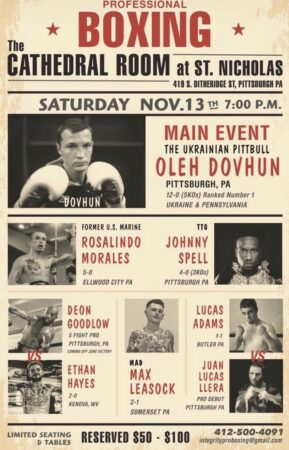 Last night was one of the more memorable club shows in Pittsburgh in recent memory. Integrity Fighter Management in association with STAR Boxing and matchmaker Brian Dillon Boxing put together a card of competitive well-matched fights.

From the door, Dovhun controlled all the action. Round after round, the Ukrainian Pitbull used Lomenchenko-esque straight left, right uppercut and straight left combos which split the high guard of the ever advancing Dezurn. A clash of heads in round four caused minor cuts along the left eye of Dovhun. Trainer Michael McSorley kept the bleeding under control between rounds. Dovhun pitched a flawless shut out and the judges saw it the same way with 100-90 across the board. Dovhun goes to 13-0 and will receive a top 15 WBA ranking.

In the Co-Feature, US Marine Rosalindo “Rosie” Morales from Ellwood City PA goes to 6-0 with a UD victory over Monterrey, Nuevo Leon, Mexico’s (2-0) Arturo de Islas. The fan favorite Morales consistently landed the harder shots throughout the six-round affair. Morales had to move and work hard for the victory as the Mexican challenger never stopped coming.

Pittsburgh super featherweight “TTG” Johnny Spell went to 5-0 with a victory over awkward Washington D.C. (5-7) veteran James Early. In the 3rd round, Early began taunting Spell by putting his hands behind his back in a Tyson Fury like manner. Spell dominated the 4th round with a barrage of right hands and left hooks that had Early missing of the counterattack.

Butler PA’s (1-1) Lucas “Hands of American” Steel gained revenge in his six-round rematch with Morgantown’s (4-1) Matthew Wright. This was a close fight. The three judges thought otherwise and gave Adams the unanimous decision. Preston West Virginia’s Ethan Hayes went to 3-0 with a UD victory over Pittsburgh’s gritty Deon “The Bloodhound” Goodlow who drops now to 2-4.