Oleksandr Usyk returned to the Ukraine as a hero 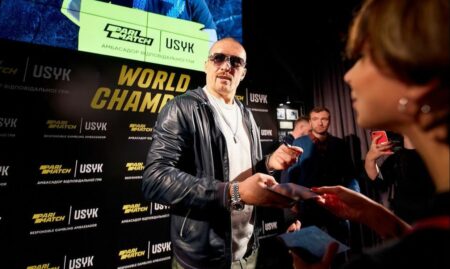 The new heavyweight king was welcomed in style and talked a bit about how he feels about that big win in London last week and everything that is happening with his career.

“When I walked into the ring, I admired the arena, the people, the lights. I had seen it in my dreams when I was 18 or 19, preparing for the Amateur Cup. One day I imagined a big stadium with lots of lights,” he told local media about Saturday night at Tottenham’s soccer stadium.

His great skills and strategy allowed him to put on a great fight, dominate Joshua from start to finish and leave a great impression, but that does not alter the fact that it was a tough fight against a strong opponent.

“I’m not going to hide that there were punches I felt on my chin, in my stomach, that sent me to Elon Musk (the moon) for a while, but I came back quickly,” he assured.

Usyk said that now he just wants to be with his family, rest and only after that he will think about boxing again. The public is eager to know what is coming for the Ukrainian in the near future.