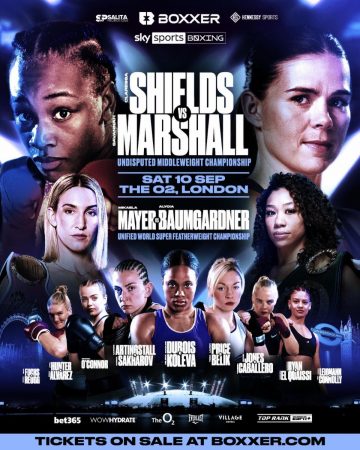 Golden girl Lauren Price MBE (1-0) will fight on a historic night of women’s boxing as the Welsh wonder takes on Hungary’s Timea Belik (6-6-0, 2 KOs) at The O2 in London on 10th September, screened live and exclusively on Sky Sports.

Tickets are on sale now via Boxxer.com, with prices beginning at just £25.

Stylish southpaw Price opened her professional career with an impressive points victory over Valgerdur Gudstensdottir at Wembley back in June.

And the Tokyo 2020 Team GB gold medallist from Newport will be keen to make another emphatic statement of intent to the middleweight division on what will be a defining night of ‘Legacy’ at the iconic venue in London.

Price’s partner and fellow Olympic hero Karriss Artingstall (1-0) will also be out to make it two wins from two on the professional scene when she faces off against France’s experienced campaigner Marina Sakharov (5-16-2, 3 KOs).

The Macclesfield featherweight shone on her debut in Coventry earlier this summer, when she comfortably dispatched Vaida Masiokaite on points.

Destined for superstardom, ‘Sweet Caroline’ dazzled in front of a sold-out Boxxer crowd in Bournemouth last week as she celebrated her third professional win inside five months, demolishing Happy Daudi with a clinical, third round TKO finish.

Fight fans will undoubtedly witness something special with Dubois in action, when the Shane McGuigan-trained southpaw displays her dynamite arsenal of shots in her home city.

But she faces a formidable opponent in Koleva who took Katie Taylor to the distance back in March 2017, only to be beaten on points.

“Caroline was incredible in Bournemouth and is clearly destined to reach the top, but this fight against Milena Koleva will be a tough step up for her against an opponent who pushed Katie Taylor to the limit. I also can’t wait to see Lauren and Karriss in action on the same night. Both have exciting futures and I know they will be keen to steal the limelight with impressive performances.

“Thanks to an incredible summer of the Lionesses celebrating Euro glory and the success of the Commonwealth Games in Birmingham there’s a massive feelgood factor around women’s sport and now it’s professional boxing’s time to shine. We couldn’t be any prouder to put on this historic show at The O2.”

Adam Smith, Head of Boxing Development at Sky Sports, added: “This truly is history in the making. And adding three super talented and hugely popular Olympians to the mix makes it even better. Caroline has shown why she will be a prospect to be feared, especially with her brilliant display recently in Bournemouth.

“And both Lauren and Karriss are destined for very bright futures – Olympic 2020 medalists and now two of the brightest prospects in British boxing and emerging onto the professional circuit in an era when women’s sport is ascending to its rightful place alongside the men’s game and inspiring a whole new generation of female athletes. I cannot wait to watch all three in action for what will be an unmissable evening at The O2.”

Londoner Shannon Ryan (2-0) makes the short Tube trip across the Jubilee Line from Neasden to North Greenwich as the super flyweight comes up against Spain’s Bucha El Quaissi (3-2-3, 1 KO).

Over a decade in the making, bitter rivals Claressa Shields (12-0, 2 KOs) and Savannah Marshall (12-0, 10 KOs) headline the most anticipated women’s fight in history in a winner-takes-all undisputed title clash.

Also fighting on this unmissable evening of boxing are some of the best female fighters on the planet in Mikaela Mayer (17-0, 5 KOs) and Alycia Baumgardner (12-1-0, 7 KOs). The American rivals will battle it out in the co-main event for the undisputed super featherweight championship.

Rances Barthelemy: I feel I gave the fans an exciting fight Juggernaut hits Las Vegas ahead of Parker clash – Quotes