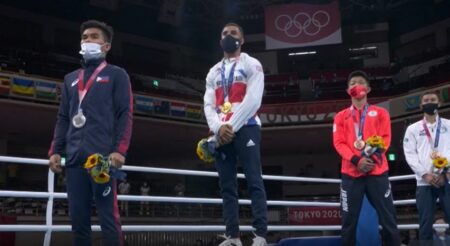 Galal Yafai claimed GB Boxing’s first gold of the Tokyo 2020 Olympics with a superb flyweight (Under 52kg) final victory over Carlo Paalam of the Philippines.

The Birmingham City boxer used his trademark front foot, close range style to overwhelm his opponent and deservedly claim the contest on a 4-1 split decision and make it five wins out of five during a fantastic tournament for him.

As ever, the man boxing out of the orthodox stance looked calm and collected as he strode to the ring for the biggest bout of his life.

And as the opening bell rang, he set to work and pushed his opponent back, knocking Paalam to the floor part-way through the first round with a powerful left hand.

Though Paalam survived a count from the referee, he was unable to make much of an impression in the rest of the three minutes, meaning Yafai secured the round unanimously.

The second round saw Paalam change tactics and attempt to box more aggressively, but Yafai maintained his dominance with the cleaner shots to take it 4-1.

With a healthy lead, Yafai knew it was a case of boxing sensibly in the third round to avoid letting his opponent back into the bout and he did just that.

So even though he conceded the final round 5-0, he took the bout overall by a margin of 29-28 on four of the judges’ scorecards.

Yafai received his gold medal from the IOC’s Gianni Infantino, who is also president of FIFA.

As he stood on top of the podium and the national anthem was played, he was still seen shaking his head, seemingly still struggling to believe what he had achieved.

“Being Olympic champion is something I have always wanted to do and I’ve done it now, so I’m over the moon,” said a delighted Yafai.

“I was working six years ago, but took up boxing and, thankfully, it worked out for me. I’ve just trained hard and it shows if you do work hard you can reap the rewards.

“I bet my friends and family back home are over the moon. Everyone back home in Britain and Birmingham have given me some ridiculous support. I’d like to say thank you to everyone.

“It was great to hear the GB support and I could hear Frazer (Clarke), who I’d like to wish a happy birthday for today!

“He said to me before the bout to go out and win the Olympic gold for his birthday, so that’s a great present for him.”

Tomorrow, Lauren Price will attempt to win GB’s second boxing gold medal of the Games when she takes on China’s Qian Li in the middleweight (Under 75kg) final bout at 2.45pm (6.45am UK time).