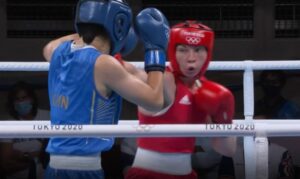 The Welsh boxer’s triumph on the final day of the Games has capped a brilliant tournament for GB Boxing, where they have also won two silver and two bronze medals – making it their most successful in more than a century.

World, European and Commonwealth champion Price went into the bout as favourite, but nevertheless faced a tough assignment in the shape of Li, who was the number two seed, 2018 world champion and a bronze medalist from Rio 2016.

The southpaw, however, showed no signs of nerves or suffering from the pressure of expectation and immediately hit the ground running.

Despite being the smaller boxer, she used her speed of hand and foot to land punches before retreating out of range, deservedly taking the opening round unanimously.

It was more of the same in the second round, winning it 4-1 on the judges’ scorecards, as her Chinese opponent simply had no answer.

Price could have boxed defensively in the third and final round to protect her lead but instead she pressed home her advantage, landing clean shots while rarely being hit herself.

It added up to a clean sweep of the judges for the final three minutes and four verdicts of 30-27 and one of 29-28 overall.

Price hugged her opponents and coaches and also saluted the GB support made up of team-mates staff after her impressive, unanimous victory.

She becomes only the second female British boxer to win an Olympic title following Nicola Adams, who won gold at both London 2012 and Rio 2016.

GB finished second in the boxing medals table behind Cuba and won the joint most (six) in all, alongside the Russian Olympic Committee team.

“I can’t really put it onto words… it’s a dream come true and I’m having to pinch myself,” said Price.

“It just goes to show with the years of hard work that if you dream and you work hard enough then you can achieve anything.

“I’d like to thank everyone for supporting me on this journey, from starting off at eight years of age, it means the world to me and has got me through.

“I know my grandad (who died last year) is looking down on me today and has been all week. I can’t put into words what he and my nan have done for me and this is for them.”

International boxing tournament to be held in Mongolia