On This Day: 42-1 Buster Douglas Shocked Mike Tyson… and the World 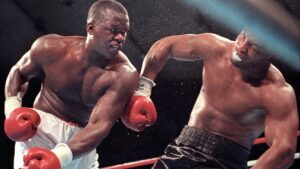 This February marks the 31st anniversary of the most seismic shock in the world of modern  boxing.

“It was an amazing dream,” Douglas said of that February 11th, 1990 knockout. Buster was given little or no chance of surviving more than a handful of  rounds against the fearsome Tyson, who was undefeated as a champion. That fight in Tokyo was considered as a easy and mere stepping stone  for Mike Tyson, prior to an expected and very much anticipated fight against  Evander Holyfield.

Not many knew that the challenger   was a tremendous sportsman, who had excelled at high school basketball. But people refused  take him seriously despite his record of 29 wins and only 4 losses as a professional.

Son of boxer Bill “Dynamite” Douglas, “Buster” had already dished up and dished out some excellent  fights in his career, but sometimes he showed lack of discipline and commitment.

That all changed!  Almost three weeks before the match, Perla Lula, Douglas’s Mother and the person who devotedly and totally believed in him, passed away. When reminded that no one thought he had a chance to defeat Tyson, James said, “My Mother believes in me!”

Mike Tyson looked menacingly indestructible up in  the ring/ He`d built   a formidable 37-0 record with 33 KO’S before this fateful fight. Las Vegas bookmakers rated him as a near sure fire 42-1 favorite. But that night “Buster” came out inspired, endured and weathered a firestorm during the initial rounds, constantly using his long ramrod left-handed jab. In the eighth round Buster was felled to the canvas. Inspired and determined not to buckle, he got up, fought on and fought back, giving Iron Mike a belting.  During the next round, he  completely dominated.   In the tenth, came culmination through  achievement.

“I hit him with a great combination, I gave him four terrible shots, and he wasn’t available to continue the fight,” Douglas said.

In October of that year Buster  lost the belt against  Holyfield in Las Vegas. The purse bid for his only title defense has been estimated at seven million dollars after taxes, so that helped  to provide a comfortable life.

Belief and inspiration CAN move mountains!