On This Day: Floyd “Money” Mayweather Was Born 1977 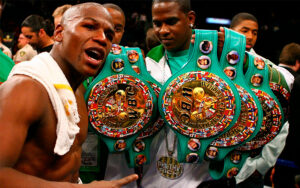 Floyd possessed incredible speed, accuracy dedication and tenacity. He applied the most important principle in boxing: to hit and not get hit. Floyd developed, possessed and brilliantly guarded an impeccable, flawless, unbeatable style. He retired undefeated with 50 wins and is considered among the best fighters in all boxing history.

Floyd`s first championship triumph was when he contested the WBC super featherweight title on October 3, 1998 against reigning champion Genaro Hernandez.

He defended this title eight times, then deciding  to climb up to the lightweight division which was then ruled by José Luis Castillo.  Floyd defeated him by unanimous decision. Floyd then did it again.

Floyd defended crown on three successful occasions until 2005, when he fought WBC super lightweight champion Canadian Arturo Gatti stopping him in the 7th round.