On this day: Gene Fullmer made his pro debut in 1951 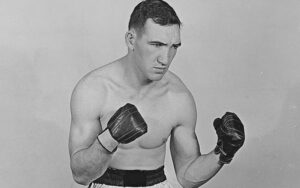 Gene Fullmer, made his pro debut against Glen Peck. The fight was at the George Nelson Fields House in Logan, Utah. He won in the first round. Six years later he would become world Champion defeating Sugar Ray Robinson by unanimous decision in a 15 rounds thriller.

Thomas Patrick Ward: My class and skill will make the difference ‘Never been happier’ – Ryan Garnier shares excitement about back fighting