On this day: Muhammad Ali lit the Olympic torch in Atlanta 25 years ago 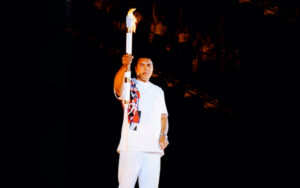 Olympic heavyweight champion, supremo of the world three times, boxing legend, historical social and political icon, personality and poet, all rolled into “WON”….the one and only Muhammad Ali.

His sparkling effervescent personality, his undaunted bravery in the face of  adversity, his kindness, generosity,  love and humanity,  more than matched his extraordinary agility, reflexes, exceptional speed, plus  the pinpoint accuracy of his lightning punches. Unique technique!

Muhammad Ali`s great battles in the ring, will be remembered and marvelled at, as long as there`s boxing. But, his greatest, most enduring, endearing, bravest and most remarkable fight, was against Parkinson`s Syndrome.

He was diagnosed with this cruel debilitating illness in 1984; however, his intelligence, spirit and determination shone undimmed, as with the Olympic torch, he lit up the perpetual flame at Atlanta Olympics in 1996.

All over again, an outpouring of affection, and admiration from millions, in a new and younger generation of sports fans. Because true courage is timeless. It is measured,  in triumphant response to overcoming adversity.