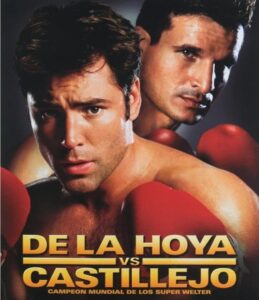 It was also the first time that a Spanish fighter stepped on to US soil as a Champion and not as a challenger. Javier Castillejo fought on that occasion against the aspiring and inspiring Oscar De La Hoya, who ended up winning the World Boxing Council super welterweight title.

The “Lince de Parla”, with a record of 51 victories, 34 KO’s and 4 defeats, resisted a skilled and fast De La Hoya, with 33 victories, 27 knockouts and 2 losses, until the end of the fight. He dusted the canvas once in the twelfth round.

De La Hoya was superior throughout the fight and at times Castillejo was almost overwhelmed by the enormous superiority of one of the best boxers of this decade.