On this day: Usyk became the undisputed cruiserweight champion 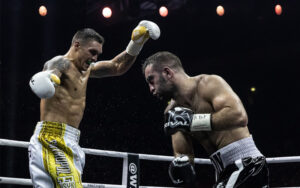 Usyk’s demonstration was overwhelming. He showed superb technique also employing smart  defence, to prevail on the three judges’ scorecards were 120-108, 119-109 and 119-109, thus becoming the first Champion of the World Boxing Super Series Tournament.

Usyk was lauded by the fans,  and received the Muhammad Ali Trophy from the widow of the “King of Boxing”, Lonnie Ali.

Usyk won three important victories to win this tournament. He first defeated German Marco Huck in September 2017, then Mairis Breidis and  Gassiev, all fighting in the countries of his rivals.

Tina Rupprecht vs. Katia Gutiérrez – where to watch? Anthony Joshua puts all on the line against Oleksandr Usyk September 25