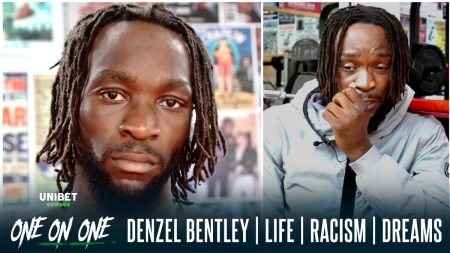 Denzel Bentley has revealed that he put himself through the torment of reading the social media ‘comments’ following his defeat to Felix Cash in April of last year.

Battersea boy Bentley was brutally parted from his treasured British title belt at York Hall, the same venue that plays host to the first defence of his second coming as British champion against Marcus Morrison this Friday, live on BT Sport.

In the first of a new series of special features as part of the Unibet Lowdown, Dev Sahni introduces ‘One-on-One’, which tells the life story of the charismatic middleweight. The exclusive Bentley episode will be posted live at 6pm on Wednesday.

The 27-year-old, who recaptured his title in a compelling clash with the previously unbeaten Linus Udofia in May, talks us through his forthcoming challenge from Morrison, potential future matches against promotional stablemates Hamzah Sheeraz and Nathan Heaney, while looking back on being left in Ghana by his parents at the age of eight. He also discusses growing up as a young black man in London, the feeling of being stereotyped and being stopped by the police since he was 11 years old.

“I feel I am a mad realistic guy and I know that was a bad loss,” reflected Bentley on his Cash collapse. “Two of my friends pulled up to the venue and, after I tried to ghost them and look the other way, they asked if I was alright and then said ‘don’t watch that, man’.

“Slowly the whole family started to slide up and I was literally trying to slide out. After that I was just lying on my bed one day and I posted something on Instagram. I was going through the comments and I had people telling me to go back to the amateurs and learn this and that.

“I was burned and wanted to reply, but I thought ‘nah, I will be here all day’. Going through it, some people were telling me I would be back and some were full-on rinsing me. After I went through Instagram I was like ‘ok, cool, let’s check Twitter’.

“I tapped in my name, saw all the abuse, then went through the fight and the abuse was crazy. It was mad. I don’t know if it was upsetting, but it bothered me.

“I got to the last of about 300 comments and I was like ‘it’s done now’, there is nothing now that is going to push my emotions, whether it is positive or negative.

“You could say I have taken emotional strength from it and now when I see things I can laugh.”

Tickets for Bentley vs Morrison at York Hall on Friday, 16 September are on sale now, available exclusively from ticketmaster.co.uk.

To view One-on-One in full, click HERE from 6pm on Wednesday