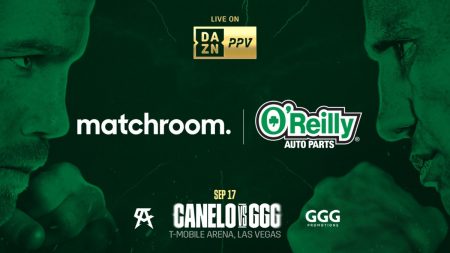 Eddie Hearn and Matchroom are delighted to welcome O’Reilly Auto Parts as a partner for the blockbuster trilogy battle between Saul ‘Canelo’ Alvarez and Gennadiy ‘GGG’ Golovkin at T-Mobile Arena in Las Vegas, Nevada on Saturday September 17. The event will be broadcast live on DAZN PPV in the U.S., Canada, UK, Ireland, Australia, and New Zealand as well as around the world on DAZN (excluding Mexico, Latin America, and Kazakhstan)​ and is in partnership with Matchroom, Canelo Promotions and GGG Promotions.

Alvarez and Golovkin have shared 24 thrilling rounds already in this hottest of rivalries and the pair will meet for a third time, five years after their first battle ended in a controversial draw and then the Mexican star edging out Golovkin via majority decision, both at the T-Mobile Arena that will host the third installment.

O’Reilly Auto Parts has been a prominent supporter of boxing for many years, including sponsoring the first two epic bouts in the Canelo-GGG rivalry.

“We are delighted to have O’Reilly Auto Parts on board for the biggest fight of the year,” said Hearn. “They have a long and proud tradition of backing this sport, and it is great to have their support on what promises to be an unforgettable night in Las Vegas.”

“O’Reilly Auto Parts is pleased to continue our association with Canelo-Alvarez and GGG for this trilogy match,” said O’Reilly VP of Marketing and Advertising Hugo Sanchez, “and we will be joining boxing fans everywhere in watching these two great fighters give their all inside the ring.”

O’Reilly Automotive, Inc.(NASDAQ: ORLY) is one of the largest specialty retailers of automotive aftermarket parts, tools, supplies, equipment, and accessories in the United States, serving both professional service providers and do-it-yourself customers. Founded in 1957 by the O’Reilly family, the Company operated 5,873 stores in 47 U.S. states and 27 ORMA stores in Mexico as of June 30, 2022.