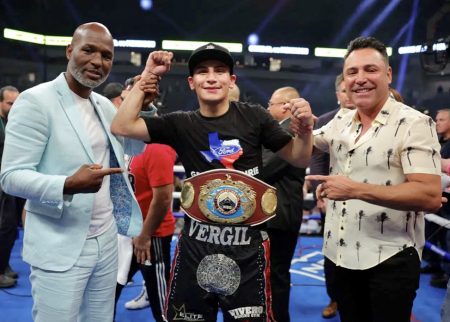 Solidifying his spot as one of the top contenders in the welterweight division, Vergil Ortiz Jr. (19-0, 19 KOs) defeated Michael “The Problem” McKinson (22-1, 2 KOs) via technical knockout at 0:27 in the ninth round of their scheduled 12-round fight. The bout was an eliminator fight for the WBA Welterweight World Championship and for Ortiz’s WBO International Welterweight Title.

An early accidental head butt in the first round opened up a cut on Ortiz, Jr.’s left eye, but that didn’t stop Ortiz from dominating the action in the round. He landed hard, clean shots that visibly shook McKinson. Ortiz, Jr. continued the momentum in the next four rounds as the crowd erupted with random chants of “Ortiz” in favor of their hometown hero. McKinson was able to avoid some of Ortiz, Jr.’s attacks by keeping his distance and slick movements. However, by the eighth round, McKinson hit the canvas for the first time after a ruthless body shot. Ortiz, Jr. used the same left to the body in the ninth round and sent McKinson to the canvas one more time. Struggling to continue to avoid Ortiz, Jr. the fight was called off by McKinson’s corner.

“It wasn’t my best performance. The first seven rounds, I didn’t really do anything good. I should have listened to my corner in the opening rounds,” said Ortiz, Jr. “Once I listened to them, we were able to get the job done. I am ready to fight anyone. I stay training. I’ll probably be ready for a run by tomorrow.”

“I am proud to represent my country and my hometown of Portsmouth,” said McKinson. “Not a lot of fighters were lining up to fight Vergil, and I am proud of being able to show that I can fight at this level. When I entered the ring, there were a lot of boos, but I must have done something right to be walking out with cheers for my performance.”

The co-main event of the night featured the newly crowned WBC, WBA, and Ring Magazine Flyweight World Champion Marlen Esparza (13-1, 1 KOs) of Houston, TX, defending her three world titles for the first time against her mandatory, former WBA Interim Flyweight World Champion Eva “La Ley” Guzman (19-2, 11 KOs) from Maracay, Venezuela. The fight was Marlen’s toughest challenge yet, but she maintained control and the pace of the fight. Esparza won via unanimous decision with scores of 98-92, 98-92, and 95-91.

In an entertaining fight, Dallas’ native Maurice “Mighty Mo” Hooker (27-3-3, 18 KOs) took on welterweight contender Blair “The Flair” Cobbs (16-1-1, 10 KOs) of Philadelphia, PA, in a 10-round super welterweight fight. Cobbs established dominance early as he knocked down Hooker in the first round, twice in the second and was literally saved by the bell to survive into the third round. In the third round, a more composed Hooker was able to land a few heavy blows that shook Cobbs. In the sixth round an accidental head butt opened a wound on top of Cobbs’ left eyebrow, prompting the doctor to inspect the cut. The fight was allowed to continue with both Cobbs and Hooker landing heavy blows that kept the crowd engrossed in the action. In the eighth round, another accidental clash of heads lead the referee pausing the fight for the doctor’s inspection, but the pause did not stop the fighters momentum as they looked for opportunities to catch each other with a good shot. The fight went the distance with the judge’s ruling in favor of Cobbs via unanimous decision with scores of 90-97, 90-97, 91-96.

“This wasn’t an easy fight, it was a tougher fight than my last one, and this victory for sure has put me in the top ten rankings,” said Blair Cobbs. “I fought a tougher, heavier fighter. He could box and had an extremely long reach, but today I showed that I can go into deep waters, box, and give fans a show. I want to thank god for this performance, there is nothing stronger and greater than god. Today, I showed that I have more to give to the sport of boxing, that even through adversity Blair ‘The Flair’ will come out on top.”

Opening the DAZN stream, Bektemir “Bek The Bully” Melikuziev (10-1, 8 KOs) of Indio, CA, took on Sladan “The Miner” Janjanin (32-13, 24 KOs) of Boston, MA in an 8-round super middleweight event. Melikuziev started off the fight landing heavy blows, knocking down Janjanin every round until the referee waved off the fight at 2:18 in the third round awarding “Bek the Bully” a victory via TKO.

“I didn’t know my opponent until recently so we trained to have a good camp and a preparation,” said Bektemir Melikuziev. “After I dropped him with the body shot I was hoping he would keep going, we didn’t come here to end it one punch. We want to make sure we get some rounds in to gain some experience. But he was an awkward fighter, very uncomfortable but I think my training really showed off today.”

The main event of the Golden Boy Fight Night: Ortiz, Jr. vs. McKinson Prelims on the Golden Boy Boxing YouTube page, featured Austin’s Floyd Schofield (11-0, 9 KOs) who successfully measured up his skills against veteran fighter of Mexico City, Rodrigo Guerrero (26-15-2, 16 KOs). The 8-round lightweight fight featured a lot of activity from Schofield as he knocked down Guerrero several times throughout the bout. Guerrero’s corner ultimately waved the white towel at the conclusion of the fifth round awarding Schofield the technical knockout.

Chicago’s Alex “Chi Town Heat” Martin (18-4, 6 KOs) went the distance with the battle-tested warrior Henry “Hammerin Hank” Lundy (31-11-1, 14 KOs) in a 10-round super lightweight fight. The fight started out in Lundy’s favor as Martin fell to the canvas the first minute of the first round. The fall looked like a slip but was ruled a knockdown as the referee started his count, to which Martin responded and continued the rest of the round. The rest of the fight included a friendly trade between two fighters eager to gain the upper-hand over the other. The entertaining fight went to the scorecards as the judges ruled in favor of Martin with scores of (98-91, 97-92, 97-92).

Undefeated, fan-favorite Carlos Nava (9-0, 6 KOs) of Pasadena, TX participated in a lively match against veteran fighter Rodolfo Hernandez (30-11-1, 28 KOs) in a 6-round super lightweight bout. Nava was successfully able to knock down Hernandez in the second round, but the resilient fighter was able to survive up until the fourth round where he struggled against the ropes. The referee determined that Hernandez had enough, and stopped the fight at :36 seconds remaining in the fourth round.

Opening the Golden Boy Fight Night: Ortiz, Jr. vs. McKinson Prelims, Rohan Polanco (8-0, 5 KOs) of Santo Domingo took on Memphis’ Dedrick Bell (31-33-1) in a scheduled 8-round welterweight fight. Polanco unleashed a flurry of punches knocking Bell to the canvas in the first round, but survived to the second round. However at the 2:13 marker of the second round, Bell fell to the canvas once again with the referee determining the fighter was no longer able to continue, awarding Polanco the winner via knockout.