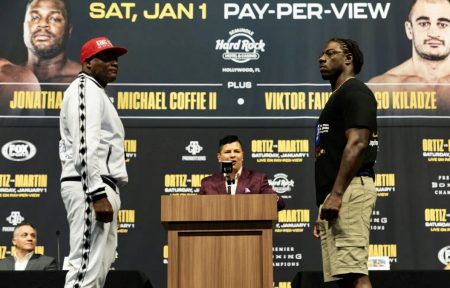 The press conference also featured rising heavyweight star Frank “The Cuban Flash” Sanchez and Christian Hammer, who dueled in the 10-round co-main event.

Rounding out the heavyweight extravaganza and facing off at Thursday’s event were heavyweight contenders Jonnie Rice and Michael Coffie, who meet in a 10-round rematch, former title challenger Gerald “El Gallo Negro” Washington, and Turkish Olympian Ali Eren Demirezen, who battle in a 10-round fight, and unbeaten Viktor Faust and Iago Kiladze, who square off in the 10-round pay-per-view opener at 8 p.m. ET/5 p.m. PT.

Tickets for the live event, which TGB Promotions promote, are on sale now and can be purchased at Ticketmaster.com.

Here is what the fighters had to say Thursday from Hard Rock Live:

“I’m very thankful for this great opportunity that my team has set me up with on Saturday night. It’s exciting to be able to give the fans a great show.

“When somebody says they’re going to knock me out, it just makes me laugh and smile. Everybody says that. But you’re facing a fighter who has been through it before so that you can try your best.

“I’m glad that he’s saying that he’s going to knock me out. He’s coming with bad intentions, and so am I. Anyone can land the big shot, but it’s going to be me with my hand-raised Saturday night.

“I’m very proud to have made my pro debut here at Hard Rock and to have done it in style. I’m glad that he trained well for this fight because he will face a tough fighter who knows how to adapt.

“First of all, my mind is 100%, and that’s the most important thing. On Saturday night, everyone will see that physically; I’m also completely ready to become world champion.”

“I’m so excited for this fight. This is a great opportunity, and I’m thankful for this chance that I have. It’s great to be displayed as the headliner. PBC has faith in me, and I’m going to go out and show why.

“What you see is what you get. I’ve been working hard in the gym day in and day out. It’s like second nature to me. I’m ready to let my hands speak. I’m going to be very skillful in there.

“This is going to be a great fight. You don’t really see two southpaws too often in the heavyweight division. You’re going to see some excellent boxing in this fight.

“You’re going to get a knockout in this fight. We’re not going to go 12 rounds. I know I’m going to knock him out.

“I didn’t get a fair shake in my first run as champion. This is the revenge tour right now. Luis Ortiz is first on my list of these last four fights I want before I retire, including two against Anthony Joshua. I want to beat him down twice.

“My trainer Manny Robles and I have been doing a lot of great work in the gym. People only see what happens in the ring; they don’t see what happens behind closed doors. I have a business to take care of on Saturday, and we’re ready.

“I’m remaining hopeful about getting another world title fight. I never overlook my opponent or look ahead to another fight, though. Ortiz is the only opposition that I see at this moment.”

“After joining with my trainer Eddy Reynoso’s team, I’ve learned so much under his tutelage. It’s put me in a position to give an outstanding performance Saturday on pay-per-view.

“We trained hard, and we prepared to fight anyone who would be stepping in against me. I was ready for Negron, but I was going to be prepared for anyone standing there in front of me.

“Christian Hammer is a good fighter, and I’m going to be ready for him. That’s what we train for. The opponent doesn’t matter if you’ve prepared to 100% of your ability.

“If I win on Saturday, I feel like I’m going to keep moving up and facing tougher competition. I believe I’m going to be ready for the world title fight next year.”

“I was with my team here in the U.S. already, supporting my teammates Viktor and Ali when I got the call about this fight. I had a great training camp with them, so I was ready to take this fight.

“It’s my job to take these fights. I’m going to do my job and give everyone a good fight on Saturday. I know Sanchez is a good fighter, but I’ve faced a lot of good fighters. We’ll see what he’s made of.”

“Of course, I feel pressure to repeat my performance from our first fight. Many people thought it was a fluke, so now I have to do the same thing twice. I’m getting paid more this time to do it even quicker in this fight.

“Everyone knows how these things go. In the first fight, I was a big underdog, so everyone thought something must have gone wrong. Something had to be out of the ordinary. Let’s understand something, though; it will go down the same way Saturday night.

“I don’t feel like he underestimated me in the first fight. I know his attention had been on Gerald Washington. These things happen.

“I’m more confident now than ever. If he doesn’t bring me down a level, my head will keep getting bigger and bigger. He might have to do me a favor because right now, I feel like I’m about to take over the whole world.”

“I didn’t touch Rice in the first fight, but I’m going to feel him for sure on Saturday night. I have a chip on my shoulder now.

“I have to prove myself. I didn’t get a chance to show what I could do in the first fight. I don’t care about my record, and I just want to show my skills. Everyone is going to see it on Saturday.

“This time, Rice is my original opponent from the beginning. We prepared explicitly for him this time. I’m also a lot healthier for this camp. I’m 100%, and I’m ready to go.

“This is not a real beef between us, but it’s intense, and it’s part of the game. We’ll play that game on Saturday, and may the best man win. I know that it’s going to be me.”

“I feel great. It’s good to be back. I’ve been in the gym working hard with my team. I’ve learned a lot of great things, and I’ve taken advantage of the time I’ve had.

“I’m looking forward to showing off my hard work and getting back into a top position in this division. My opponent is coming in hungry to prove himself, and that should make this a great fight for the fans.”

“I’ve had three fights since the Efe Ajagba fight, and I’ve gotten much better since then. My skills have improved, and I’m very eager to get in the ring and display them.

“This is my second chance fighting in the U.S., and I want to show that I belong in this position. I have to get by this test against Gerald Washington. That’s the only thing that’s on my mind.”

“I’m an excellent fighter, and I’m going to show everyone on Saturday. I plan to display my technique, skill, and power in this fight against Kiladze.

“It’s exciting to be in this position. I love to compete, and Saturday is a big opportunity for me. I know I have to give a great performance.”

“I work hard and train so much. I’ve had a very long training camp. I’m in great shape now, and I will give everyone another great fight on Saturday night. I promise that.

“There are a lot of great fighters on this card, and I’m excited to be here with them. I’m going to prove with how I fight on Saturday that this is exactly where I belong.”