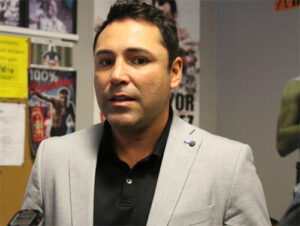 Despite all the controversy surrounding his career as a boxer and promoter, Oscar De La Hoya has been one of the most influential personalities in the sport and a transcendent figure in every aspect.

This weekend, the website Yucatan.com.mx published an interview with the American of Mexican descent, in which he talked about important topics related to boxing and his career, with special emphasis on the current state of the discipline and the advice he would give to fighters.

“The advice I give them, which I think are the most important, are not the positive ones, but the negative ones, because those are the most valuable. For example, the easiest and the most difficult at the same time: ‘take care of your money, don’t do this, invest, don’t spend your money like crazy, don’t buy cars, invest well’. These are tips for them to learn, to grow as persons, because I can tell them things regarding boxing: ‘train hard, always give one hundred percent’, but anyone can give those. For me, other advice are worth more. They should grow, they should have wisdom, they should learn to live because that will last a lifetime, boxing doesn’t last long. Good boxers, and good people too,” said De La Hoya.

“If you earn a million dollars in a fight, just with the general expenses you only get half of it. You have half a million. If you’re going to buy a car, you’ve already lost a hundred thousand, you have 400 left. If you give some to your manager, your trainer, your people, you lose another hundred thousand… And if you want to buy a watch, or other things, you have a hundred thousand less… When you realize it, you have nothing left,” he said.

The president of Golden Boy Promotions also spoke about the creation of boxing figures and reminded how new world-class fighters have always arisen. He spoke of recent times and how Mayweather and Pacquiao shocked the world, while years later Canelo arrived. He also assured that today there is enough young talent to have important quality fighters.

De La Hoya also talked about great topics such as his beginnings, the influence of his trainers and how he dealt with the comments after his victory against Julio César Chávez in a great and complete interview.

On This Day: Floyd Mayweather Defended Title Against Carlos Rios 1999 Nisse Sauerland on Filip Hrgovic: “We Would Love to Fight Bakole…”