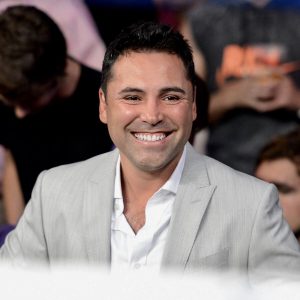 With what now is becoming a worrying trend with so many recently retired and long retired boxers coming out of the woodwork, former multi-weight world champion Oscar De La Hoya IS to make a boxing comeback at age 47. He will fighting at super welterweight or middleweight.

“The rumors are true, and I’m going to start sparring in the next few weeks,” De La Hoya told ESPN. “It’s a real fight. I miss being in the ring, I love boxing. Boxing is what gave me everything I have today, and I just miss it.

“It’s a real fight,” said De La Hoya, who was 35 when he last fought. “I miss being in the ring. I love boxing. Boxing is what gave me everything I have today, and I just miss it.

“Look, it’s been a long time, yes,” he said. “But actually my jab feels faster than ever. I have to make sure that my conditioning is perfect, my health is good. And that’s going to take place in the next few weeks. So we’ll see.”

“Any top guy, any top guy out there,” said De La Hoya.

“Look, my last fight with Pacquiao,” De La Hoya said, “I weighed in at 145 and obviously that was a shell of myself.

At least it is not the money he is coming back for as he has a reported $200 million stuck away for a rainy day. We can only hope his urge to comeback after 12 years does not outweigh the fact that he is approaching 50 and the health implications that are involved.

This is not a planned ‘exhibition’ but a comeback aimed at top level. Unfortunately this does not look like to have a happy ending for the once P4P multi-weight champion.