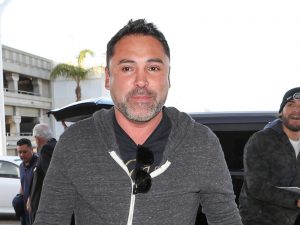 With what now is becoming a worrying trend, it is reported that former multi-weight world champion Oscar De La Hoya is to make a boxing comeback at age 47. He will fighting at super welterweight or middleweight.

“The rumors are true,” De La Hoya said, “and I’m going to start training in the next few weeks.”

“It’s a real fight,” said De La Hoya, who was 35 when he last fought. “I miss being in the ring. I love boxing. Boxing is what gave me everything I have today, and I just miss it.”

“Look, it’s been a long time, yes,” De La Hoya said. “But actually, my jab feels faster than ever. I have to make sure that my conditioning is perfect, my health is good. And that’s going to take place in the next few weeks. So, we’ll see.”

Look, my last fight with Pacquiao,” De La Hoya said, “I weighed in at 145 and obviously that was a shell of myself.”