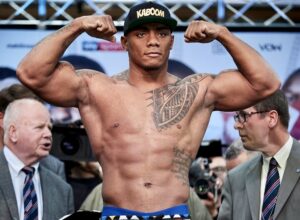 After fighting for four fights straight abroad, as reported prior, Tyson Fury is to fight on the 5th December at the Royal Albert Hall in the UK, with a fighter to be named soon. There is reportedly a list of five names to choose from that are in the mix as the next opponent.

Otto Wallin has called Fury out for the rematch, Lucas Browne did yesterday and the latest fighter is once beaten Oscar Rivas. His only loss was to Dillian Whyte in 2019.

Rivas’s joint promoter Yvon Michel told Sky Sports: “Oscar is fit, available, ranked No.8 by the WBC and would gladly take the challenge.

“‘Now for December I believe Oscar would be the best and the logical choice for Fury in his first title defence.

“We know Fury loves challenges and fights for the fans.

“Fury has written the best story of all for a fighter who became a heavyweight champion of the world and I am sure he is aware of Rivas’ story.

“Rivas would be the best challenge and a fan-friendly fight.

“Oscar is in training and was supposed to fight on December 19 as co-feature on the Fury vs Wilder fight.”

Frank Warren (Fury’s UK promoter) added: “Tyson has said enough is enough, he is not going to wait longer and he will fight in London in December.

Prior, we broke down the WBC top 15 contenders (this can be viewed > here <) and naturally, Rivas was on the list. Our conclusion was “unlikely” as he is too much of a high risk a fighter with the Anthony Joshua 2021 unification fight a high possibility.

If he takes on Rivas, he will surely have bigger balls than we think he already has.