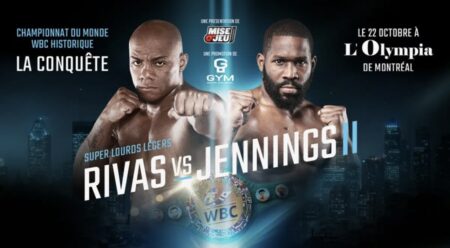 A great World Boxing Council (WBC) World Championship fight will officially come to fruition on October 22nd, in the bewitching atmosphere of L’Olympia de Montréal, a renovated venue that has kept its captivating cachet. Those who will have the privilege of being there will attend a colorful show in an exceptional environment that they will not soon forget.

For the first time in history, the WBC Bridgerweight title, under 224 pounds, will be on the line. Adopted Quebecer and WBC No. 1 contender for the vacant WBC title, Oscar “Kaboom” Rivas (27-1, 19KO) will face American and No. 3 rated Bryant Jennings (24-4, 14KO), of Philadelphia, Pennsylvania.

This is a major clash for the two fighters and their careers, which promises to be a risky, hotly contested contest. After all, the winner will become the monarch of this new division. This grand and historic showdown marks the return of American television to Canada for the first time since December 2018, as ESPN + retained the broadcast rights to the fight in the United States. In total, this prestigious gala will also be broadcast live in nearly 50 countries.

Rivas was ranked among the world’s top 5 heavyweights when he was selected as the No. 1 contender in the WBC’s newly created division. In his last fight this past March, he easily disposed of Sylvera Louis by retirement in the 3rd round. In addition, boxing fans remember the fight delivered by “Kaboom” in England on July 20, 2019, against Britain’s Dillian Whyte (25-1, 18KO), in his previous outing. Rivas lost by close decision, even though he knocked his opponent down in the 9th round. The loss was very bitter, especially when it became known that Whyte had allegedly tested positive for illegal substances before the fight without BBBofC intervention.

This will be the second clash between Jennings and Rivas, who fought an extremely contested duel on January 2019, in Verona, New York. Also broadcast by ESPN +, Rivas-Jennings I was virtually even after 11 rounds. At the start of the last round, Rivas attacked with an aggressive and intense push to send the American to the floor, and subsequently forced the referee to end the hostilities. Since that time, the Philadelphia boxer has been calling for a rematch.

Jennings has fought one fight since his first fight with Rivas, a decision loss to Rio Olympics silver medalist and mandatory world contender to champion Anthony Joshua, Joe Joyce (13-0, 12KO). Jennings is the only one to have crossed the line against the British giant. The scores of 115-112, 118-119 and 117-110 indicate that Jennings managed to win several rounds in this match, despite it being held in Joyce’s backyard in London.

A total of 6 boxing matches are planned for this magnificent evening.

The return of the charismatic Sébastien Bouchard (19-2, 8KO) is confirmed, He will be back in the ring for the second time in 2021, after suffering a major injury against Ayaz Hussain in Quebec in 2019.

Alexandre Roberge (1-1) and Francis Charbonneau (3-1, 1KO) caused a stir March 16th in their 6-round confrontation, which was won by Charbonneau via split decision. The two young boxers will pick up where they left off with another 6-round fight.

The evening’s other fights will be announced later this week.

The Oct. 22nd event, presented in association with Mise-O-Jeu, will mark the 49th world Championship fight promoted by GYM since its founding in 2004.

Marco Antonio Barrera vs. Daniel Ponce De Leon on November 20 Boxing legends must not be compromised (by Mauricio Sulaimán)