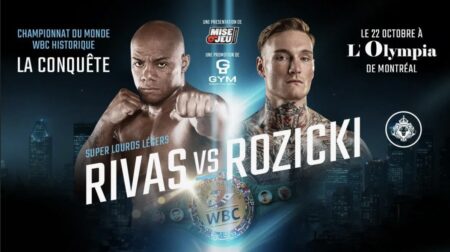 The inaugural World Boxing Council (WBC) Bridgerweight World Championship fight (under 224 lbs.) will take place this Friday (October 22nd), promoted by Groupe Yvon Groupe (GYM) in collaboration with Three Lions Promotions, and a presentation of Mise-O-Jeu, at the Montreal Olympia.

Rozicki is a powerful, undefeated puncher who has won each of his thirteen professional fights by knockout. His record includes his win over Shawn Miller (18-4-1, 7 KO) in May 2019 for the WBC International Silver crown, as well as the defense of the same title in February 2020 against Vladimir Reznicek (9-2-2, 4 KOs).

By his uncompromising style, “Bruiser” became very popular especially in English-speaking Canada. “Rivas will be my toughest opponent yet,” Rozicki explained. “It’s everything I’ve dreamed of since I started boxing. Thanks to Yvon Michel and my promotional team for making this possible. On October 22nd, I will become world champion.”

In front of him stands an opponent who has been waiting for his chance for a long time, top contender Rivas, who easily disposed of Sylvera Louis (8-5, 4 KOs) by retirement after three rounds last March. Rivas, of course, was the victim of a very controversial defeat in July 2019 in England to Dillian Whyte (25-1), by way of a 12-round decision despite having sent him to the mat in the ninth round.

“Oscar Rivas is in the best shape of his career,” according to his trainer, Marc Ramsay. “I know Rozicki very well and he is very dangerous. He reminds me of a big Joe Smith, Jr., who without being the best technician, compensates with enthusiasm, aggressiveness and determination in the ring ”

This fight turns out to be more than a major one for the careers of the two pugilists. The winner will be crowned king of this new division. The historic showdown marks the return of American television to Canada for the first time since December 2018 as it will be broadcast live on ESPN + in the United States. In total, this prestigious gala will also be broadcast live in nearly fifty countries. In Quebec, the event will be available on pay-per-view television on Canal Indigo, Bell TV, Shaw TV and Fite.tv.

In the co-featured event, charismatic Sébastien Bouchard (19-2-0, 8 KOs) will be in his second fight of 2021, after suffering a major injury against Ayaz Hussain in 2019. He will face Mexican welterweight Sergio “Checo” Ortega (24-2-0, 18 KOs), of Baja California, Mexico, in an explosive 8-round duel.

With his third knockout victory this past August 28th in as many career fights, Alexis Barrière (3-0, 3 KOs) will return to the Olympia ring. This time around, the heavyweight will face Rafael “Rafaga” Sanchez Rojas (5-1, 3 KOs), of Mexico, in a 4-round clash.

As expected, the 6-round rematch between Alexandre Roberge (1-1-0) and Francis Charbonneau (3-1-0, 1 KO.) remains on this card. The two cruiserweights caused quite a stir on March 16th in their 6-round confrontation, which Charbonneau won by way of split decision.

Canadian light heavyweight prospect Terry Osias (9-0, 4 KOs) was supposed to have a fabulous 2020 with a series of fights planned at the Casino de Montreal. The pandemic decided otherwise, though. Osias finally finds his way into the ring again on Oct. 22nd against his Mexican opponent, Joaquin Murrieta (9-9-3, 7 KOs), who has won his last two fights by knockout.