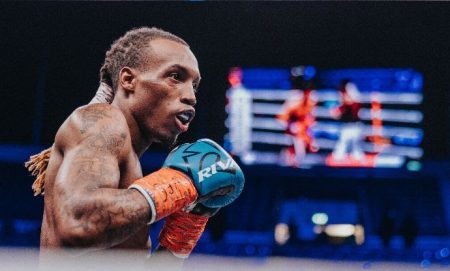 O’Shaquie Foster has described sparring sessions with Shakur Stevenson as like an “intense game of chess” that made the gym crowd fall silent.

Foster is ranked as the No1 super featherweight contender with the WBC and is next in line for a shot at fellow American Stevenson.

The pair are friends, have shared countless rounds in the gym and Foster took Stevenson’s recent comments about him as being the second best 130lbs fighter in the world, as a mark of “respect”.

“Shakur and I are cool, we’ve got a past, we were really close at one point in time, so I expect him to say stuff like that, we’ve got a lot of respect for each other,” Foster told Probellum.com.

“In 2015 /2016, we were staying in Virginia together, before he turned pro, and we did some great sparring together and we’ve sparred in the last year or two also.

“It was great work. It’s like an intense game of chess. It’s fun. We had a lot of people just coming back every day to watch.

“There was a lot of people watching but it was kind of silent, it was so tactical, everybody was trying to see who can get the ups on who.”

Foster is waiting on his next fight date after March’s career-best win over Muhammadkhuja Yaqubov at Probellum Evolution secured his place as the No1 contender in the division.

A fight with Eduardo Ramirez was ordered by the WBC as a final eliminator, but the Mexican has moved up to lightweight.

The 28-year-old, from Texas, is on a nine-fight winning streak and now wants the platform and opportunity to prove why he believes he can become a “great” of the sport.

“I just know I can bring something to the table, and I just want the world to be able to see that because I can go down as one of the most talented fighters to ever come through boxing if I’m able to prove it.

“Yaqubov was the highest ranked opponent I’ve fought and because of the ring rust, it made me adjust and confirmed another aspect of myself that I’m able to address. I’m able to just have fun and adjust on the fly and that let me know that I can be great.”