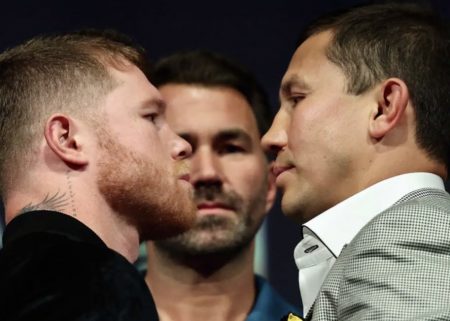 Prior to the third leg of the Canelo Alvarez vs. Gennady Golovkin trilogy, Vegas Insider caught up with Swedish heavyweight boxer Otto Wallin. The big Swede, who took Tyson Fury to the brink of defeat, discussed how Canelo Alvarez can finally KO the Kazakh but explained why he doesn’t think he will. Otto Wallin talked about how Golovkin can look towards the recent Alvarez to Dmitry Bivol defeat to get some pointers on how to beat the Mexican favourite. Lastly, Wallin revealed his predictions for this fight and talked about what’s next for his own career.

Canelo Alvarez says his goal is to knock out Gennady (GGG) Golovkin. The last two fights have been going the full 12 rounds. What makes this one different? What do you think Alvarez needs to do to knock him out?

Otto Wallin: “This fight is different because 4 years have passed since the last fight.”

“Canelo has been much more active than Golovkin has over these last few years. Also, I believe Father Time is catching up with Golovkin as he is now 40 years old. I think that has shown in his last few fights. Canelo on the other hand is only 32 and is in his prime.”

Amir Khan believes in Alvarez KO’ing Golovkin. Do you agree with him?

“Canelo definitely has the tools to stop Golovkin, but he has a really good chin and a big fighting heart.”

“Canelo would have to let Golovkin tire himself out a little bit and target his body a lot. That’s how I would see him being able to stop or KO Golovkin.”

“I don’t think it’s out of the equation that Canelo stops Golovkin but I wouldn’t bet on it.”

Alvarez lost his last fight to Dmitry Bivol, maybe showing that Golovkin can challenge him for this one. How do you see Golovkin winning? What does he need to be doing in the fight to win?

“(Dmitry) Bivol beat Canelo with good fundamentals. He showed good defence, good footwork and a good work rate. That’s what Golovkin would have to use (to win this fight), but in his last few fights, he’s not had great footwork and has been quite easy to hit.”

“For this fight, I’m hoping Golovkin can get his footwork and defence going. Because if he doesn’t it’s gonna be a really hard one to win.”

Another thing Golovkin would have to use is a good work rate. Canelo doesn’t like when somebody keeps a high pace and throws combinations. That showed a lot in his loss to Bivol.”

“One detail that I think Golovkin needs to pay attention to, is that he always has to be ready with his defence after firing shots. Canelo has developed into a superb counter-puncher and Golovkin has a tendency to, especially jab, and bring his hand back low afterwards.”

“Golovkin must bring his jab-hand back to his chin to avoid Canelo’s counterattacks. If he doesn’t Canelo is going to slip his jab and fire a cracking right hand.”

What are your predictions for the fight? Will we see the full 12 rounds or win by KO? Who will win?

“I see Canelo winning by a clear decision. I think the simple fact that Golovkin is now 40 and hasn’t really looked the same in his last few fights is gonna be the difference.”

Lastly, is there any news regarding an Otto Wallin fight anytime soon?

“No news for me yet, but I’m training and just waiting and hoping for something big soon.”

“If Joshua won’t fight Fury I’m ready to take on any of them. Also, Dillian Whyte is a fight I really want and since he pulled out of our fight last year I think it’s time we make it happen.”