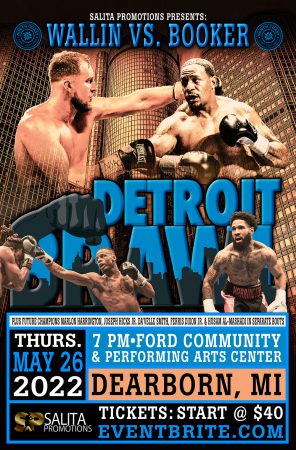 #11-rated heavyweight Otto Wallin of Sweden cruised to a clear and workmanlike unanimous 10-round decision over disappointed hometown hopeful Rydell Booker tonight in the main event of Salita Promotions’ Detroit Brawl event in the Lincoln Ballroom of the Ford Community & Performing Arts Center in Dearborn, Michigan.

Booker (26-6-1, 13 KOs) started out having some limited success, but the superior conditioning and harder punches of the world-class Wallin (24-1, 14 KOs) eventually wore the Detroiter down to an ever-worsening degree as the rounds progressed. By the end of the final round, Wallin had things all his way, landing punishing shots to the head and body of his fatigued foe.

“I want to say thanks to everyone who came out,” said a happy Wallin, post-fight. “It’s my first time in Michigan and I really enjoyed it. (Tyson) Fury forgot about me. He doesn’t want to fight, but I’m still going to be the next heavyweight champion from Sweden, no matter who I have to beat.”

Despite having never been down before, Veron found himself on the canvas twice from the power punches of Ergashev, once in the second from a straight left and again in the fifth from a body shot. Veron was also cut over the right eye in round seven. Ergashev lost a point in round seven for pushing down on the head of Veron.

Although he saw his current knockout streak come to an end, Ergashev was never in any danger and cruised to a 79-70 unanimous victory from all three judges.

Showing good ring generalship, Harrington was in control throughout, landing several choice uppercuts and body shots before a hard right hand left Cosio in a heap in the neutral corner at the :38 second mark. No count was necessary, as Cosio was pouring blood from the right ear from the force of Harrington’s blows.

Boxing smoothly, Hicks was considerably faster than his South American foe. He whipped uppercuts to the chin and body shots to the pit of the stomach around his southpaw opponent’s wide left hands. He dropped a gasping Romay twice before referee Gerard White reached the 10 count.

Undefeated super welterweight Husam Al Mashhadi (3-0, 3 KOs) of Dearborn ran through pro debuting Milton Banks of Conroe, Texas. The power punching Mashhadi landed a pair of body shots, each producing a knockdown. And although Banks rose bravely from both, referee Frank Garza called a merciful halt at just 1:26 of the first.