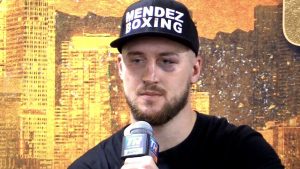 On Saturday night, Sweden’s heavyweight contender Otto Wallin (21-1, 14 KO’s) added Travis Kauffman (32-4, 23 KO’s) to his list of beaten opponents after Travis Kauffman was pulled out of the fight with a shoulder injury, bringing on a TKO by way of doctor stoppage at 2:32 of the fifth round. The scores were 40-36, 40-36 and 39-37 at the time of the stoppage.

“First, I wanna go back to New York and relax a little bit,” said Wallin during a post-fight press conference. “It’s been a year of training since I fought Fury, so I’ve gotta enjoy myself a little bit, and then get back to training. And hopefully, I can get back [in the ring] before the end of the year, because it’s very important to stay busy now. Because before Fury, I had only fought one round in 18 months. And then I fought Fury. Now, it’s been another year. So, I’ve got five rounds here, a good fight, and I wanna be back soon again, so I can stay busy. That’s most important for me.”

“I felt like after two or three rounds, he was slowing down,” said Wallin on the stoppage. “And I felt like the danger was over and I could pretty much stay in front of him and pick him apart. So, I felt that he was breathing [heavily] and I felt like I was landing some good body shots, and I was gonna keep going to the body. So, I felt, more or less, it was a matter of time. I think I would’ve stopped him anyways, yeah.”

“I wanna say happy retirement,” Wallin said on Kauffman’s retirement. “I mean, he’s been a tough guy. He fought some good guys, and he always put up fun fights. When I was studying him for this fight, it was always fun fights to watch. You know, him and [Chris] Arreola, and [Scott] Alexander, Luis Ortiz. I know he’s a father of quite a few kids, so I’m happy that he’s all right, except from his shoulder. So, happy retirement to him and all the respect.”

“I have no idea,” Wallin said on who would be the next opponent. “I haven’t thought further than this fight right now. And I know Fury and [Anthony] Joshua, they’ve got fights already, and they’re gonna be tied up for a while, so I’m not sure.”