Outrage Continues Over The Jackson Maríñez vs Rolando Romero Decision 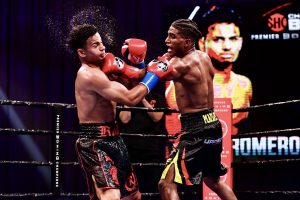 The boxing world (especially the boxing fans on social media) are still furious over the twelve round decision loss given to Jackson Maríñez this past Saturday at the Mohegan Sun in Connecticut. Both fighters were unbeaten going in with Romero spending the majority of the fight loading up and stalking while Maríñez intelligently placed his shots and seemed to land more of the clean punches as opposed to the harder ones.

The judges controversially scored it 115-113, 116-112, 118-110 for Romero that has brought on outrage by the camp and across social media to the point of WBA president Gilberto Jesus Mendoza tweeting, “I just spoke with both teams and we are going to study the possibility of a rematch.”

“I don’t think I had a bad performance,” said Romero after the fight “I thought I won the fight. Regardless of everything, I’m the world champ now. I’m happy. He came out a little bit tougher and slicker than what I thought, but all he did was move around the entire fight. He didn’t even try to engage.

“It’s hard to knock out someone who doesn’t try to engage. I hurt him multiple times with body shots and a few hooks. There was one moment I hurt him with a right hand and he pulled my head down. It was just hard to finish him off. Yeah [I would give him a rematch]. He didn’t do anything special.”

Marinez, after reviewing the fight, felt Romero won no more than three rounds:

“I saw the fight nine rounds to three. I don’t know what the judges were watching, one of them even had me losing by a lot [118-110]. The referee also treated me badly, he put his hand on my stomach, he pushed me as it was seen in the fight, he pushed me a couple of times. He was not giving attention to the things that [Romero] did with his elbow, things that he explained to us in the dressing room that we should not do,” Marinez told ESPN Deportes.

“The world of boxing, everyone who knows what good boxing is, observed what happened [on Saturday] night…. they saw that the decision that was not in accordance with the fight I made. We are going to continue with more faith and more strength.”

“We had a pretty strict preparation and the results were seen. It is sad, really, that a fighter like Jackson Marinez, who is very disciplined and who has been in boxing for almost 20 years, sees his dream cut off by a bad decision or as you can think.. the dark hands were behind everything to favor a person who did not have the merits,” Herasme said.

“[Marinez] feels a little disappointed and we don’t know how an athlete could react to a decision like this….. the disappointment. So hopefully a precedent can be set because the world of boxing spoke with one voice and what it says is that it does not want things like this to happen again. Regardless of your nationality, where you come from, economic power or if you represent money for the business, what we want is that whoever wins their fight it should not be taken away from them.”

This can only be corrected by a full investigation. Failing that, an ordered immediate rematch between the two fighters will be the likely outcome.

“I will f**k Terence Crawford up!” – Garry Russell Jr. on Instagram ALA Promotions of The Philippines (Since 1985) Are No More