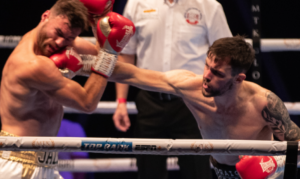 Padraig McCrory described fighting at the Feile in 2019 as the best experience of his career so far, and he’s expecting to top that feeling when he collides with dangerous Russian Sergei Gorokhov at this year’s event.

McCrory (11-0, 5 KOs) will be looking to extend his undefeated record to 12-0 when he meets Gorokhov (11-2-2, 7 KOs) for the WBC International Silver super-middleweight title on the Conlan Boxing and Top Rank event in Belfast on Friday 6 August.

‘The Hammer’ is looking to build on his first round stoppage win over Mickey Ellison last September, along with his knockout over Steve Collins Jr during the Feile in 2019.

Defeating a fighter in their hometown is nothing new for Gorokhov though, as he travelled to Serbia and stopped previously unbeaten Marko Nikolic in Belgrade back in April to claim the WBC International Silver super-middleweight title.

McCrory is well aware that he has a tough task ahead of him, but he’s more than ready for anything the Russian has to offer.

He said: “My opponent is experienced and is used to travelling for opportunities. He will be coming to take my unbeaten record, but I’m fully prepared for it.

“He went and knocked out an opponent who was 27-0 last time out to win the WBC International Silver title, so I know that I’m in for a hard fight.

“I fought on the Feile back in 2019 and it was the best experience of my career, so I’m expecting more of the same. We had 10,000 fans in an outdoor arena in my backyard, so I’m privileged to be sharing the bill with some world class talent once again.

“I’m just buzzing to get the opportunity to fight on the biggest show in Ireland. I was meant to fight back in April and picked up a very strange injury, but the knee is healthy know and isn’t affecting me in any way.

“I’m hoping this win puts me on the verge of a world ranking, and I just want to face the best possible opponents in my division.”