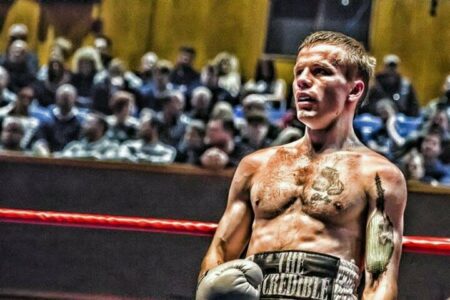 Paul Holt is ready to pour everything that he has left into the rest of his boxing career as he prepares for a ring return.

His route back begins on home turf at the H Suite in Edgbaston, Birmingham, during a weekend double-header of shows staged by BCB Promotions, set for October 16 and 17.

Holt features on Saturday night, where he will be in pro action for the 18th time, with a chequered record of 10 wins and seven losses to look back on.

The second-generation fighter, as son of former pro Mark Holt, has adopted a fearless approach ever since he first laced on a pair of gloves.

He racked up 48 amateur bouts for Nechells Green Boxing Club, with 26 victories, before turning pro in late 2013, where he would match his dad’s achievements.

Holt Jnr, a fellow southpaw, followed in his footsteps with Midlands title glory in 2016, halting Louis Fielding by sixth round stoppage.

That was in the super featherweight division, after a crack at the featherweight crown his father once held proved unsuccessful, against Bobby Jenkinson, a year earlier.

He relinquished the strap and was defeated challenging for it again, going down in three to Lyon Woodstock, and has only won once in seven outings since.

That success did come over another Midlands title contender, Luke Jones, and all of those setbacks came at the hands of highly-rated opponents, who were undefeated.

Holt, who has just turned 31, insists he’s not content with just making up the numbers, with 2021 so far containing TKO losses to Louie Lynn and Sean Gerard Duffy.

He said: “Being a former Midlands champion does give you a bit of credibility, but I don’t want to be someone who is going out there and can’t hack the pace anymore.

“Coming into this year, I knew the only way to get fights was to box on the TV, against unbeaten prospects. I’ve been in twice, with two top lads. I’m just trying to keep busy.

“I got stopped, in both of them, but I felt like I could have continued in the first one. I’d come through a tough spell, early on, and I was determined to see the final bell.

“The second time, fair enough. He got me with a good body shot and I can tell you that it hurt! It was a great punch, so you have to respect that.

“I’ve lost a few as a pro, but I’ve never backed down from anyone. You only have to look at my record to see that. I was the same as an amateur.

“I really want to get back in the mix for the Midlands title. It doesn’t seem like five years ago when I won it. The buzz I got from that night was unreal, I still can’t even describe it.

“I never lost the title, it just sort of got away from me, which was a bit of a wounder and left me feeling pretty low. I’d worked so hard to get there and I’d love to do it all again.

“Originally, I was supposed to defend it against Sam Bowen (before he became the British champion), but I needed more notice than they were prepared to give me.

“The belt was vacant when me and Lyon Woodstock boxed for it. I was doing alright, then he caught me with a long-range hook and I felt my ear pop. Maybe I’ve lost my way since then.

“I’m 31 now, so I reckon I’ve got another two to three years left in boxing. I’ve just got to go for it, no messing about, and leave everything in the ring.”

Tickets for the Birmingham bills are available now, priced at £40 standard or £75 VIP ringside with buffet per day, directly from the boxers or by visiting myfighttickets.com.