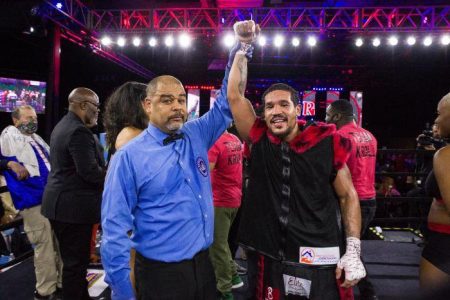 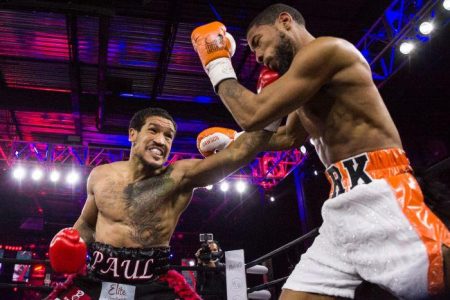 In a much anticipated battle between undefeated Philadelphia based welterweights, Paul Kroll won an eight-round unanimous decision over Mark Dawson Jr. in front of an enthusiastic, near-capacity crowd at 2300 Arena in Philadelphia.

The bout headlined a six-bout card, promoted by RDR Promotions.

In round one, Kroll dropped Dawson with a hard right hand. With Dawson hurt, Kroll looked to close the show in the opening frame, but Dawson did well by holding on, and Dawson even landed a big left himself at the end of the round.

For the balance of the fight, Kroll boxed his way behind his jab. Dawson was looking to use his length and box from distance. Neither was able to have his opponent in trouble for the rest of the fight, but it was Kroll who was more consistent with his work and won by scores of 80-71 twice and 79-72 twice.

In the opening frame, Adams landed a big right hand that sent Kizito plummeting to the canvas, and the fight was stopped. Kizito needed oxygen, but was able to walk out of the ring.

Adams of Philadelphia is 2-0 with one knockout. Kizito of Baltimore..MD is 3-6.

Starling was dominating the fight, and even landed a big flurry on the ropes in the 2nd round that seemed liked the fight was close to being stopped. Starling was looking to throw a left hand when he felt something in his and fell to the ground in pain. He could not continue and the fight was stopped at 2:59.

Clark of Houston, Texas is 1-1 with one knockout. Starling of Philadelphia is 4-1.

Isaiah Johnson stopped Anthony Young in round two of a scheduled four round junior welterweight bout.

Johnson nailed Young with a series of power shots to the head and body, and the fight was stopped at 2:01 of round two.

LaQuan Evans took a four round split decision over Eliezer Olmeda in a junior middleweight fight.

In round three, Raimkulov was cut around the left eye. In round four, Raimkulov landed an overhand right that sent Gladney into the corner and referee Eric Dali ruled a knockdown.