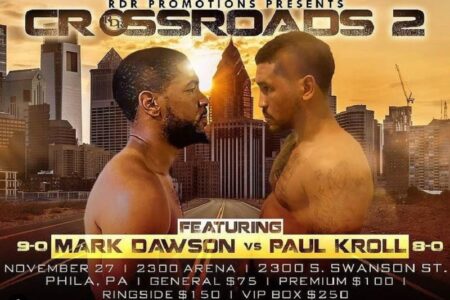 A can’t miss welterweight showdown will headline RDR Promotions big night of boxing on Saturday, November 27th at The 2300 Arena in Philadelphia.

Undefeated Philadelphia based welterweight’s Paul Kroll and Mark Dawson Jr. will fight in an eight-round bout in what will be one of the most anticipated fights featuring Philadelphia fighters in a while.

Kroll, who was a 2016 United States Olympic alternate, has a record of 8-0 with six knockouts. Kroll is a three-year professional, has a win over highly regarded Shinard Bunch (2-0) and is coming off a 10-round unanimous decision over Lucas Santamaria on October 3, 2020 in Los Angeles.

Dawson is 9-0-1 with three knockouts. The 24 year-old Dawson is coming off his career best victory when he won an eight-round unanimous decision over Ivan Pandzic (13-0-1) on July 24th at the 2300 Arena,

In the eight-round co-feature, former two-time world title challenger, Jesse Hart will be in action against veteran Ernest Amuzu in a super middleweight contest.

Hart of Philadelphia has a record of 27-3 with 21 knockouts. The 32 year-old has twice battled for the super middleweight championship of the world only to fall just short to Gilberto Ramirez in fights that were decided by just a couple of points.

Amuzu of Prichard, Alabama, has a record of 26-5 with 22 knockouts.

Amuzu, 38, is an 11-year veteran and is coming off a unanimous decision over Zacariah Kelly on June 27, 2020 in Plant City, Florida.

In an eight-round bout, Istvan Bernath (7-0, 5 KOs) of Miami is taking on an opponent to be named in heavyweight bout.

In Four Round Bouts:

Rashan Adams (1-0) of Philadelphia takes on an opponent to be named in a super featherweight fight.

Derek Starling (3-0, 2 KOs) of Philadelphia takes on an opponent to be named in a heavyweight fight.