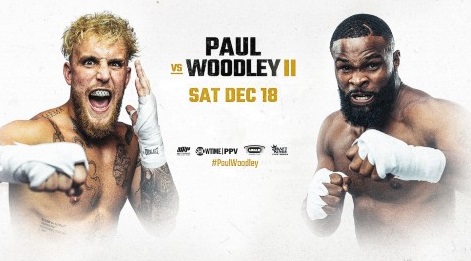 Former MMA world champion Tyron “The Chosen One” Woodley discussed his upcoming rematch against international superstar Jake “The Problem Child” Paul with media members on Thursday ahead of the sequel to their August clash won by Paul.

Paul vs. Woodley II, titled Leave No Doubt, will be the main event on SHOWTIME PPV, live from AMALIE Arena in Tampa, Fla., on Saturday, December 18 (9 p.m. ET/6 p.m. PT).

Below are quotes from Woodley:

“When I got the call about this fight I had already been training and had in my mind that I was going to fight four times next year. I was already getting battle-ready for a fight in January. It took me 20 seconds to say yes and now we’re here.

“Things happened the way they were supposed to happen. This is the fight that should have taken place anyway. More people were excited for this fight. These things happen for a reason.

“Very few times do you get a chance to go back and redo something that’s already done. You often times have regrets about how a fight went and now I get a chance to undo them. That really drives me. The fact that Jake can walk around saying he beat me, boils my blood. So I’m going to make it clear that I’m the better fighter.

“I’m going to be the better conditioned fighter in this fight. You won’t be able to tell who’s had all the time preparing for this matchup. Just like the first time. I was walking him down and putting him against the ropes. He was huffing and puffing. It’s going to be the same thing again.

“I didn’t have a lot of tape to break down the first time, but now I have eight rounds to watch and to make adjustments off of. Everyone knows no one is better in rematches than me.

“If you put a bounty on your head, I’m all about taking that free money. The knockout bonus is just a little extra perk and some extra motivation.

“I’m motivated by money, legacy and redemption. Why would you prize fight if you didn’t want a prize? But it’s also very much about the principle. At a certain point in your career, you want the bag to match with what you’ve accomplished. You’re going to see me walk away with that extra money on fight night.

“There were times in the first fight where I made him miss and didn’t make him pay. Without going into the game plan, I feel like there were times where I could have made there bigger consequences for him trying to hit me.

“I watched the first fight fully for the first time yesterday and I felt like I won rounds four through eight. And that’s not counting what should have been a 10-8 in round four with the knockdown. If I add in some more volume, I’m going to get the knockout.

“I don’t want to look ahead, but I’m not losing to Jake Paul. I’m getting the finish. I’m not leaving it in anyone else’s hands. That will probably set us up to fight a third time.

“There were times in rounds one through three where he was keeping busy but not landing anything that hurt. He does punch hard thought, I’m not going to act like he doesn’t. He hit me with some punches that would have put others down on the canvas.

“Jake has a screw loose, we all know that. So I’m not surprised he took this rematch. Everyone thinks he’s scared of me, so he couldn’t pass on the opportunity. He knows we have to make things right.

“My prediction is a knockout. When that happens depends on how much damage he can take and how much violence he can endure. I’m going to look for the openings and then I’m going to take them.”