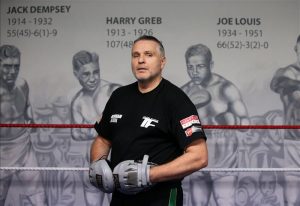 Whyte’s time for a world title?

“I think he’s ready,” Peter Fury told Sky Sports. “His mindset is there and I think he will win a world title. I think when he gets his time, Dillian, he’ll do it.

“He’s a good, solid fighter, and let’s not forget how much he’s come on as well. He’s improved a lot over the years, and he’s dedicated, so I see him doing big things.

“I think he’s ready for a world title, and he should lift one, as and when he gets the opportunity.”

“One hundred per cent. Povetkin has got a big punch. He will knock out anybody if he hits them correctly, especially if he lands that left hook he’s got.

“He’s a lot more relaxed. His footwork is a lot better. Before he was a bit clumsy going around the ring, he was very predictable, but now he is not.

“He’s a lot more polished, he’s relaxed and he’s boxing, he’s getting behind his jab. The improvements are endless. He’s made fantastic improvements.”

“It will be interesting to see [Fury vs Whyte]. When you get the best fighting the best, it’s good, so that’s what we all want to see. There’s plenty of good fights in the future.

“Dillian Whyte is a good fighter and so is Tyson, so it’s all good. To prove you are the best, you have got to take all comers on, and that’s what boxing is about. Not to pick and choose.

“I’m sure when the time is right, they will meet each other won’t they.”

Hughie Fury back in the mix?

“We’re hoping to see Hughie probably in November, early December. Hopefully he can get on one of the cards there and get in a good meaningful fight. He’s training and we are just waiting on a date for Hughie.

“He’s matured, he’s a big heavyweight and he’s hitting with a lot of power as well. We’ve got to look to the future for Hughie and I think in his next fight, people are going to wake up and see that he’s finally arrived.

“I predict very big things for him.”