Peter McGrail and Jazza Dickens hit the scales ahead of tomorrow 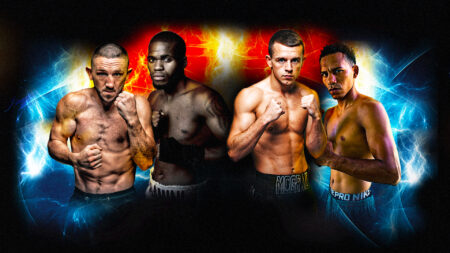 Peter McGrail says victory over Alexander Espinoza will be the launchpad towards title fights and “big things” next year.

McGrail shared a final stare down with Nicaraguan puncher Espinoza at Friday’s weigh-in ahead of his headline fight at Probellum Liverpool II.

The future world champion has only had four fights as a professional, but the Liverpudlian’s stellar amateur career means he is ready to be moved quickly towards title class.

And McGrail, who tipped the scales at 124.2lbs at the Eventim Olympia, knows a win over the experienced Espinoza will catapult him towards fights with domestic rivals Jason Cunningham, Liam Davies and Gamal Yafai – fighters the Everton fan is already confident of beating.

“At this moment in time, I’m nowhere near close to the rankings as I’ve only had four fights, but I believe over the next two or three fights, I’m going to be pushing into that top 10 domestically,” McGrail said.

“But there’s no-one even in the top four that I wouldn’t back myself against. I believe the experience I’ve had in the amateurs and boxing for Great Britain over the years, none of them in the top 10 in Great Britain would worry me.

“Cunningham has been European champion and Davies has the British, one million per cent, I believe I’d beat them.

“But I’m not one to call people out. I leave all of that down to my management team, Probellum and my coach Paul Stevenson. All I can do is make sure I am at my best in fights and I’m pretty sure that over the next few years we’re going to be showing that I’m number one.

“This feels like the start of big things for me. Next year will be the looking to start collecting some belts, it’s been a long time coming.”