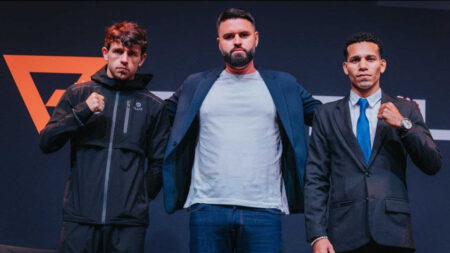 Peter McGrail delivered a chilling big fight prediction when he came face-to-face with Alexander Espinoza for the first time ahead of Probellum Liverpool II.

World-champion-in-the-making McGrail headlines a packed card at the Eventim Olympia on Saturday night and has vowed to make light work of the hardest fight of his professional career, in front of his raucous fans.

A confident Dlamini told host Ali Drew that he plans to cause a major upset and KO his rival, which prompted Dickens to ditch the pleasantries and set the South African straight.

Big fights for McGrail and Dickens are supported by a host of talented prospects, including Joe McGrail and Steven Cairns, with the action live and free to watch on Probellum.com.

Super bantamweight star, Peter McGrail said: “I see a one-sided fight, with me hitting him loads and him not hitting me much at all.
“I hope his training camp has gone well and good luck to him on Saturday night, because he is going to need it.”

Alexander Espinoza, known as ‘Supernova’ said: “I won’t say a round in which this fight will end but it is all about me and I am going to be the winner.  I can promise everyone a good fight.”

Jazza Dickens, a two-time world title challenger, replied: “I was going to welcome him to Liverpool but now he’s going home with a bandage on his head!  I see me getting my arm raised and getting this win in front of a crazy crowd here in Liverpool.”